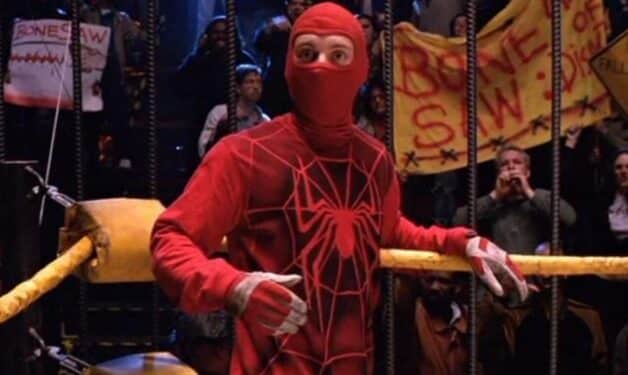 Although Sam Raimi’s 2002 superhero film Spider-Man is widely regarded as a classic, there’s at least one line that hasn’t aged quite as well. Now that Spider-Man: No Way Home has brought back actor Tobey Maguire as his iteration of Peter Parker, aka Spider-Man, for another exciting outing – fans have been excitedly revisiting the original film. But there’s one particular line from Tobey Maguire in Spider-Man that was recently removed from an airing on British TV channel ITV2.

As fans who’ve seen the film might recall, there’s an iconic sequence where Tobey Maguire’s Peter Parker decides to test his newfound superpowers. Specifically, he enters a cage match with a wrestler named Bone Saw. While Peter Parker is having fun coming up with sarcastic remarks for Bone Saw, there’s one that has been considered quite controversial today. Specifically, Tobey Maguire says the following homophobic line as an insult to Bone Saw:

“That’s a cute outfit. Did your husband give it to you?”

While a line of that sort wasn’t uncommon for that time period, it certainly doesn’t fit in today. As such, it was removed from Spider-Man by the British TV channel ITV2 as mentioned above. This was shared below via Twitter:

It seems the latter half of the insult was removed, with Tobey Maguire only saying the following:

It’s unclear whether or not the line was only cut from this airing of Spider-Man, or if other television cuts will also be effected. As for now, however, it appears that further censorship certainly is in the cards for Spider-Man. Of course, this probably won’t be that shocking of a movie for fans. After all, television networks often have films edited for time and/or content as they’re aired. This has led to some pretty hilarious and also shocking variations of beloved movies or shows. Now Spider-Man can be added to the list of notable edits.