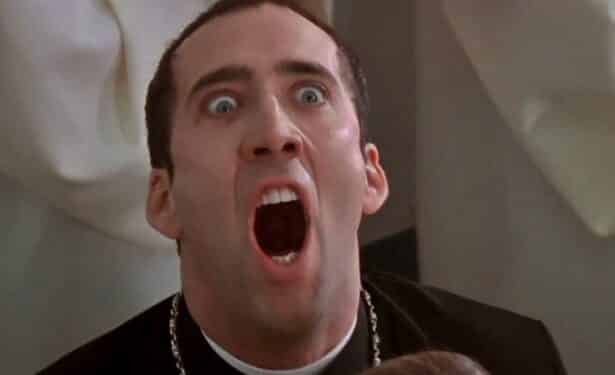 Director Adam Wingard previously announced his involvement with a potential sequel to Face/Off. At the time, however, it was unclear whether or not it would bring back original stars Nicolas Cage and John Travolta. Now we know that actor Nicolas Cage is apparently in talks to reprise his role as Castor Troy for Face/Off 2.

This was revealed by Nicolas Cage in an interview with ComicBook. Of course, he noted that while he hasn’t officially signed on, he is involved with phone calls. And as we all know, that’s the first step to real progress. Hopefully we’ll have more details soon.

As for now, here’s what Nicolas Cage had to say:

“[A Face/Off sequel] I can talk about because, there have been some phone calls with Neal [Moritz], who I enjoyed very much working with on the first Face/Off. He’s somebody, he’s one of the true, great producers in Hollywood. And, they have been making some calls. The other ones like National Treasure, I mean, their priority was a TV show. God speed to them. But, maybe Face/Off, maybe.”

Nicolas Cage recently said on a Reddit AMA he would return for a sequel, so it’s definitely interesting that talks are happening. So for now, it seems very plausible that fans will get to see Nicolas Cage return for Face/Off 2. As for any other returning faces, such as actor John Travolta, that remains to be seen. But with Adam Wingard in the director’s chair, this could be a very different and especially exciting extension of what the first film offered moviegoers years ago. So any fans can stay tuned to ScreenGeek for more updates on Face/Off 2 as we have them.

The original Face/Off was directed by John Woo and released in 1997. It was the 11th highest-grossing film of the year.