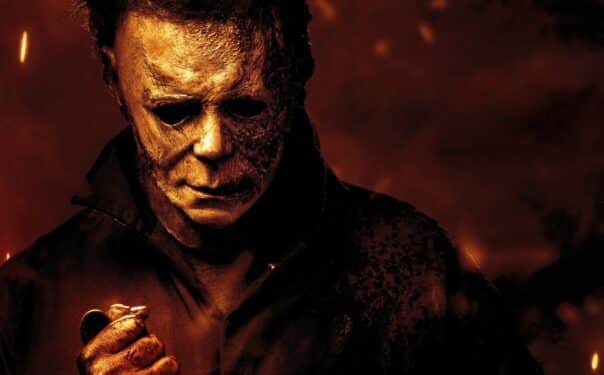 After the release of Halloween Kills, many fans were already looking forward the next installment, Halloween Ends. This particular installment is teased to be the end of David Gordon Green’s trilogy of Halloween sequels. As such, there’s a lot of hype and anticipation to see how the story concludes. And, while footage for Halloween Ends has yet to be shared to the public, audiences at the CinemaCon 2022 event were treated to a new sneak peek of the film.

Universal shared the footage from Halloween Ends during their presentation at the event. And while we don’t know much, Jamie Lee Curtis apparently had the following to say about the film:

“Trust me, it’s gonna fuck you up,” Jamie Lee Curtis announced via CinemaCon.

“Trust me it’s gonna f**k you up.” – @jamieleecurtis before introducing the very first look of Halloween Ends, coming October 14.

This is obviously quite the remark, and one that suggests Halloween Ends will be much more intense than previous installments. But considering it’s the final installment of this trilogy, fans have already been expecting something on a different level. Now, according to some of the other reactions posted on social media, it seems like that assumption might be correct. Here’s what other fans that were lucky enough to attend CinemaCon have been saying on social media:

Jamie Lee Curtis jokingly shaded the audience at #CinemaCon because they didn't give her a standing ovation. In #HalloweenEnds, Laurie Strode and Michael Myers meet for the last time: "Trust me, it's going to fuck you up," she promises. The trailer is legitimately terrifying

The trailer for #HalloweenEnds serves as a tribute to the legacy of Laurie Strode and Michael Myers. Fans of this franchise look like they are in for a real treat as this franchise comes to an end. The trailer looked awesome. #CinemaCon

First trailer for #HalloweenEnds uses footage from all the films to tie everything together and ends with @jamieleecurtis fighting Michael Myers for the last time. Thumbs up. #CinemaCon pic.twitter.com/jRZm5qIIY9

We just got a first look at #HalloweenEnds, featuring a wild brawl between Laurie and Michael in a kitchen, fighting each other. Michael throws Laurie across the room. Laurie grabs a knife and stabs Michael through the hand. It ends w/ Laurie holding a knife over a trapped Myers pic.twitter.com/ioeYmoXSX8

Playing us a great reel of #LaurieStrode 's ride thru #Halloween with some scary, gory and insanely brutal scenes for #HalloweenEnds including an awesome confrontation between her and #MichaelMyers .

It's time to do a rewatch of these to get ready for this one on October 22nd. pic.twitter.com/gCgpJyeoEj

#HalloweenEnds footage is highlighted by a brutal fight between Laurie Strode and Michael Myers and it ends with Laurie stabbing him through the hand and pulling a knife to his head. Looks like a huge improvement over the last one, can't wait!#CinemaCon https://t.co/0CRKTfeks7 pic.twitter.com/eh8jvyCsTf

While we still have some time to wait before the official Halloween Ends trailer is released, this is still an exciting tease of what’s to come. Hopefully we won’t have much longer to wait. As such, fans can stay tuned to ScreenGeek for further updates on the film as we have them.