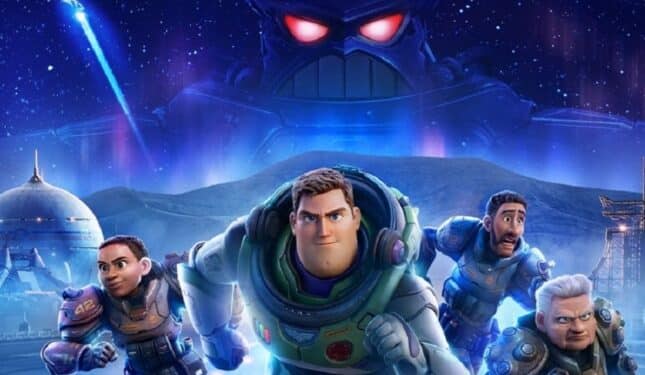 Lightyear hit theaters this past weekend – and as is the case with some newer movies and tv shows, it has been the victim of review bombing. Review bombing is not a new thing – but some sites such as Rotten Tomatoes have taken actions to try and combat it, such as making users verify that they’ve seen the film before rating it – though those actions have had mixed results.

At the time of writing, there are just over 17,000 ratings on IMDb – giving the film a rating of 5.2 out of 10. When you look at the breakdown of the website’s votes, it says almost 44% of users have given the film a “1” rating, which seems pretty off when you compare the film’s Rotten Tomatoes Audience Score of 86%. That’s not to say that the “1” ratings aren’t legitimate – it just seems abnormal.

The backlash for the film seems to mostly stem from the fact that there is a lesbian kiss in the movie. The kiss was initially removed – but was put back in after a protest from Disney employees. 14 countries banned the film from release due to the scene.

It seems as thought the ratings and review portion of IMDb wasn’t the only thing that some users were active on, as the Parents Rating Guide of the film was briefly marked “Severe” for the Sex/Nudity part of the rating, as you can see in the following tweets below:

How tf is there severe nudity in Lightyear?! Y’all are reaching with that gay kiss scene… pic.twitter.com/y46seLBEx4

The #homophobia from #Lightyear is getting out of hand.

Rated severe for sex and nudity, yet no one has a problem for the films Sleeping Beauty or Snow White when a man kisses a woman while she is SLEEPING. @IMDb pic.twitter.com/iHK8BqNtvJ

@IMDb parents guide lists sex and nudity as severe for @ChrisEvans movie @PixarsLightyear. Reason “two women kissing” The princess movies are listed as none. Create an IMDb profile and vote NONE. Stop this nonsense. pic.twitter.com/bilHgiZ00t

So, either #Lightyear is an unmitigated disaster of a movie or IMDB is being review bombed by a bunch of angry homophobes who think 2 women kissing warrants a ‘severe’ rating for sex and nudity. pic.twitter.com/E8sF5z1dhq

Now I know the latest Pixar movie Lightyear has severe sex and nudity.

Ya’ll. Why is the sex and nudity in Lightyear ‘severe’ 😳😳😳 pic.twitter.com/Ec35Dk3psf

At the time of this writing, the warning on IMDb seems to have been removed.

The new movie was directed by Angus MacLane. Chris Evans voices the character Buzz Lightyear, the toy version of which was voiced by Tim Allen in the original Toy Story films.