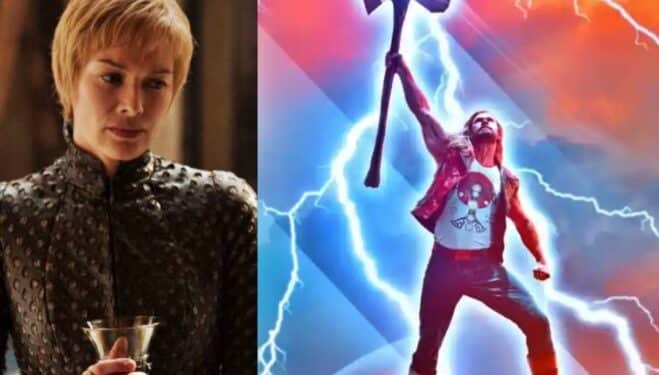 The upcoming MCU sequel, Thor: Love and Thunder, features quite the cast. Of course, as is the case with most movies, certain stars had their scenes cut. This happened to Lena Headey who had an undisclosed role in the film. Although her scenes were deleted, however, it appears that her former United Kingdom-based agency named Troika is not happy with Headey. In fact, it’s been revealed that Lena Headey has been sued by Troika for $1.5 million over various unpaid commission fees. Thor: Love and Thunder is just one of several projects that the agency claims Headey owes them money over.

As noted by Variety, that particular Marvel film accounts for $500,000 of the $1.5 million they’re seeking. They also believe she owes them at least $300,000 for the film 9 Bullets, and another $650,000 for the Showtime series Rita despite the show not moving beyond the pilot stage. Lena Headey claims the following in her defense:

“Headey claims she never signed any contract with Troika or with Duff, and that both parties were acting on an oral agreement formed when Duff was still at Lou Carl Associates in the late 1990s. Her filings also point out that Troika was never Headey’s sole agent, as she is also represented by CAA in the U.S.

More specifically, Headey disputes that Troika has any claim to commission on ‘Thor: Love and Thunder’ — which she says came about after director Taika Waititi approached her directly — or ‘9 Bullets,’ neither of which were negotiated by Troika or Duff. Meanwhile on ‘Rita,’ Headey says she only ever received $325,000 for the pilot episode, of which Troika has already been paid $22,750, and that ‘no further episodes are planned.'”

As for Lena Headey’s history with Troika…

“Headey joined Troika in 2005 after following her personal rep, Michael Duff, there from his previous agency Lou Carl Associates.”

“Duff co-founded Troika, which in 2017 merged with the James Grant Group. In 2018 the agency was acquired by a private equity firm and re-branded as YMU. Duff left Troika/YMU in early 2020 and Headey left the agency in May of that year.”

As such, it’ll be interesting to see how this situation progresses with Lena Headey having been sued by Troika. It seems as though the actress, who’s known for having worked on Game of Thrones and Terminator: The Sarah Connor Chronicles, has a solid defense for the time being. However, she’s not made any comments on the matter nor has anyone else involved. So stay tuned to ScreenGeek for additional updates as we have them.