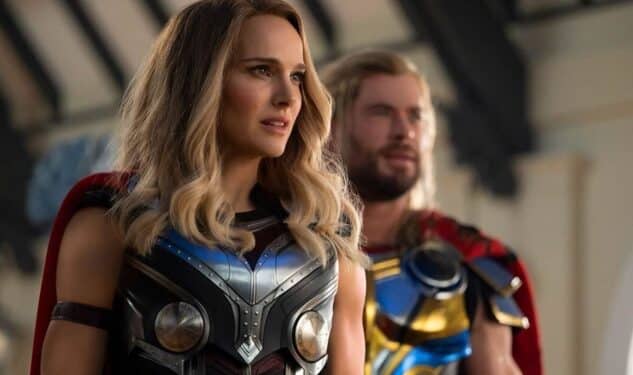 It’s been quite the wait for Thor: Love and Thunder to finally hit theaters – but the time has finally come. Fans are now able to see Taika Waititi’s follow-up to Thor: Ragnarok. With characters like Natalie Portman’s Jane Foster also returning for the new sequel, it’s certainly an exciting addition to the MCU. As such, there are also some exciting post-credits scenes in Thor: Love and Thunder, and now you can continue reading to see them explained.

The first Thor: Love and Thunder post-credits scene has several exciting revelations. For starters, we see that Russell Crowe’s character Zeus is still alive. Now that the character is healing from his injuries caused by Chris Hemsworth’s Thor, he decides to get revenge against the beloved superhero.

He stated the following:

It’s at this point we see Hercules – a new character played by Brett Goldstein that fans should recognize as Roy Kent from Ted Lasso. This is a great moment because Hercules is a character that’s appeared many times over the years in the comic books. As such, it shouldn’t be much longer before we see him fight against Thor – and perhaps even form an alliance at some point after that. For now, however, he seems very eager to complete the mission assigned by Zeus.

The second post-credits scene reunites fans with Natalie Portman’s Jane Foster. As those who’ve seen the film know, she sadly dies from cancer by the end. And, when she does, she fades into stardust much like Anthony Hopkins’ character Odin in Thor: Ragnarok. This seems to indicate that she has become an Asgardian – and one that was allowed to enter Valhalla. The post-credits scene confirms this as we see her step through a portal and enter the legendary location. Furthermore, she meets Idris Elba’s character Heimdall who was killed in Avengers: Infinity War.

“You are very welcome here in the land of the gods,” he says. “Welcome to Valhalla.”

It’s unknown if Jane Foster or anyone else in Valhalla will be brought back. However, there’s certainly plenty of potential ways that it could work. For example, with the Multiverse shaking things up, it’s possible that the dimension Valhalla resides in could be entered/exited at some point in the future. While the MCU’s Valkyries are quite different from those in the comics, those variants were indeed tied to Valhalla. Furthermore, Jane Foster even became a Valkyrie herself. With that in mind – it seems possible that she could become a Valkyrie yet again for a future MCU installment if they decide to follow the comic book lore.