Thousands Of Theaters Could Ban ‘Thor: Love And Thunder’ 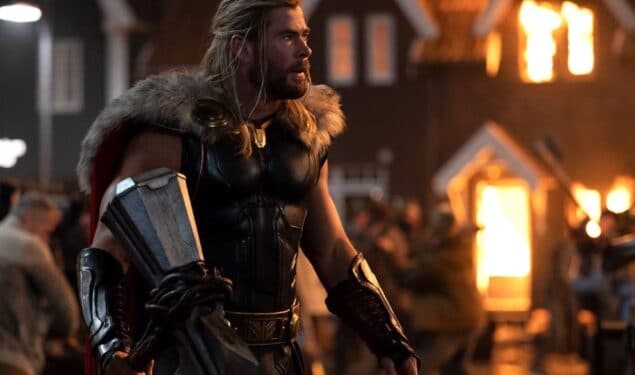 In addition to being the most inclusive films and shows the Marvel Cinematic Universe currently has, the fourth phase of content has another similarity as well. Many of the films have been banned in Middle East territories such as the UAE. The inclusive themes, while mostly celebrated in countries like the United States, are also grounds to have the films banned in Islamic nations and other such areas. Due to the fact Thor: Love and Thunder carries many of these themes like its banned predecessors Eternals or Doctor Strange in the Multiverse of Madness – it seems likely that this film could see a ban as well.

Of course, those who’ve seen the film know that the gay representation in Thor: Love and Thunder isn’t quite as heavy as these other films. If you haven’t seen the film, there are spoilers that follow.

For example, it’s acknowledged that Valkyrie had a girlfriend at one point. It’s further acknowledged that Korg not only has two biological dads – but he eventually gets a boyfriend during a quick moment towards the end of the film. Otherwise, the majority of romance featured throughout the film comes from the heterosexual relationship between Thor and Jane Foster.

As such, it’s unknown if the film could still be banned like other such Marvel projects in recent years. But considering that Taika Waititi has claimed the film is “super gay,” along with star Natalie Portman, it might be enough to upset someone somewhere.

With that in mind, we’ll just have to see what happens – and whether or not there was additional material in an earlier cut for him to say as much. Until then, it looks like the film is still scheduled to play in the aforementioned territories. So stay tuned to ScreenGeek for more updates on whether or not Thor: Love and Thunder receives any kind of ban in the near future.

Fans can currently see Thor: Love and Thunder in theaters.