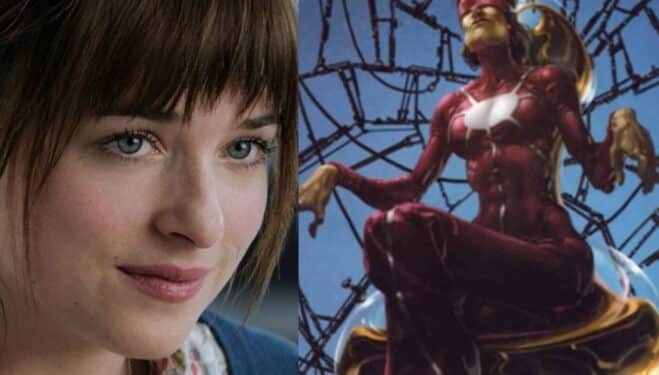 It seems as though most of Sony’s recent Marvel movies have fans asking questions. After all, the studio seems to be blending together a variety of storylines, characters, and even continuities to create their all-new shared universe. This includes variations on iconic roles that fans of the comic books remember quite differently. Now it seems that their upcoming Madame Web comic book adaptation could be another example of a titular character not quite being what they seem. At least, that’s what a newly-surfaced Madame Web set video seems to imply.

As shown below, Dakota Johnson is busy working on the set of the upcoming film. Fans already know that she’s set to play the titular character. Of course, considering the character is often elderly and even immobile, fans began questioning what Sony had planned for her.

While that’s already an exciting enough premise, things got a little more interesting in 2010. The character was reimagined as the successor to the Madame Web name, as given to her by the original clairvoyant herself. It was up to Julia Carpenter to take on the mantle going forward and now it seems like we could be getting a similar arc in this upcoming film. Of course, none of this has quite been confirmed yet, so take this information with a grain of salt.

NEW: Dakota on the set of “Madame Web” yesterday, July 20, in Boston. #DakotaJohnson

The surprisingly massive cast of Madame Web includes Dakota Johnson, Sydney Sweeney, Celeste O’Connor, Isabela Merced, Emma Roberts, Adam Scott, and Tahar Rahim. Fans can stay tuned to ScreenGeek for additional cast updates as we have them. At this rate, it’ll be exciting to see who else could be added to the growing ensemble.