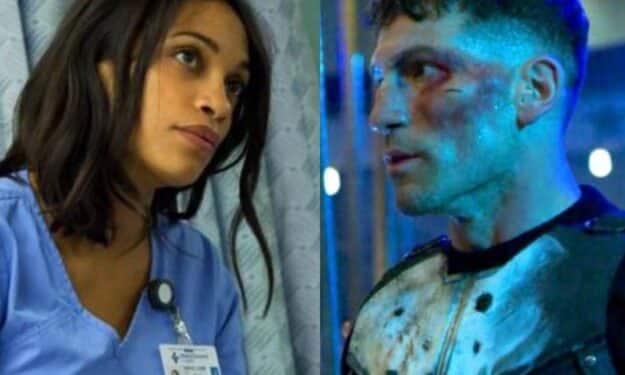 Marvel fans are still waiting to see what the grand plans are for the Marvel Cinematic Universe. And, more specifically, they want to know what Marvel Studios plans to do with the Netflix shows that were cancelled years ago. While they’ve recently regained the rights to all of the aforementioned shows, and even brought them back to stream on Disney Plus, only one of them seems to be getting the revival treatment thus far. Fans have already seen appearances of Charlie Cox’s Daredevil in a number of MCU projects including Spider-Man: No Way Home and the upcoming series She-Hulk. And he’ll eventually receive a brand-new series. But what about other characters like Jon Bernthal’s Punisher?

Well, according to recent comments made by Rosario Dawson, a Punisher revival also appeared to be on the horizon. But now she’s offering clarification for those comments.

During a recent panel at the Chicago Comic & Entertainment Expo, she claimed to have learned that “The Punisher was happening again.” Many fans thought the actress just leaked a massive announcement by claiming that. But, as it turns out, she’s now offering clarification for these comments. Specifically, Rosario Dawson seems to suggest that she was given false Punisher information from fans.

Here’s what she had to say regarding how she “can’t be trusted” and that she shouldn’t get intel from fans:

“I can’t be trusted…! Getting intel from fans during signings is iffy apparently. My bad. I get excited. Confirmation is key when you’re told what you want to hear…”

I can’t be trusted…!
Getting intel from fans during signings is iffy apparently.
My bad.
I get excited.
Confirmation is key when you’re told what you want to hear…

Of course, it’s still more than possible for a revival of The Punisher to come into fruition. Marvel Studios is very secretive about projects like these, so it would make sense if Rosario Dawson either didn’t know about it happening or had to backtrack her comments as a result.

It seems like we’ll just have to wait and see what happens. But considering that Daredevil is coming back, certainly anything can happen. Stay tuned to ScreenGeek for additional updates as we have them.