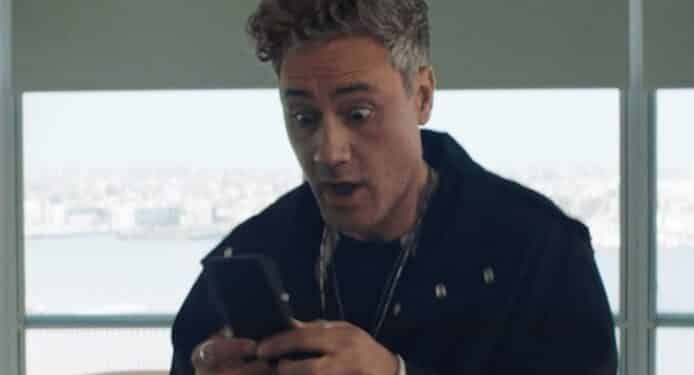 Thor: Love and Thunder, the latest Marvel entry from filmmaker Taika Waititi, has been widely recognized for its LGBTQ themes. Taika Waititi, however, has now been targeted by Twitter users over some old tweets that many deem to be “transphobic.” The tweets go back nearly a decade, and as such, there are comparisons being made to when James Gunn’s old tweets were similarly brought up several years ago. As many fans will recall, James Gunn was actually temporarily fired by Disney after the backlash.

As of this writing, however, there seems to be no response regarding Taika Waititi.

One of the first tweets that many users discovered featured Taika Waititi mocking the idea of men dressing like women for a beauty pageant.

You can see that tweet below, where he claims he should’ve “just said their makeup looks manly.”

In another post, which you can see in the screenshot tweeted below, Taika Waititi used the Thai term “Kathoey.” This term seems to have a number of meanings for transgender people, and in particular for women.

As you can imagine, the backlash was almost immediate once the tweets resurfaced. Here’s how some users responded to Taika Waititi’s old comments:

dont u find it funny how twitter made taika waititi the symbol of non-toxic masculinity who destroys cishetnormativity when hes actually ur average transphobic piece of trash who tweeted stuff like this. mind u he was over 30 here so it doesnt really matter that it was 2013 https://t.co/RDsOlT8ffJ

Those defending him are saying it was a long time ago and people change but it wasn’t that long ago, he was an adult and transphobia was already considered offensive. He hasn’t apologized and based on his Oscar movie and the Thor interviews he doesn’t really respect LGBT+ people. https://t.co/bKLhIpWbeN

Taika Waititi: There’s no way my career could be damaged
His tweet from January 16th 2013: https://t.co/y5MxlA0tiJ pic.twitter.com/XbczByjIr6

I hope he apologises for this, its absolutely disgusting, but I am just curious as to why and how this barely liked decade old tweet was found and for what purpose were they searching. I ask because I remember what happened with James Gunn, where an alt right grifter 2/3

if you’re a fan of taika waititi i’d mute his name tbh. that shit is foul and i know it’s 9 years old and it’s very unlikely he still believes that but no one should have to see those words

The downfall of Taika Waititi was all too predictable

this is when taika waititi learned about gay people https://t.co/f3X5KwhtFH

So falls the house of Waititi 👹 https://t.co/JGAaukI0lm

For the time being, however, Taika Waititi has yet to make any kind of apology or response for these “transphobic” tweets. With the way James Gunn’s situation was handled several years ago, it’s unknown what fate Taika Waititi will face. It’s very possible that he’ll continue to attempt ignoring the backlash. But as we all know, cancel culture is unlikely to let such things go.

As such, it’ll be interesting to see where this situation goes from here. Marvel fans and the like can stay tuned to ScreenGeek for additional updates as we have them.