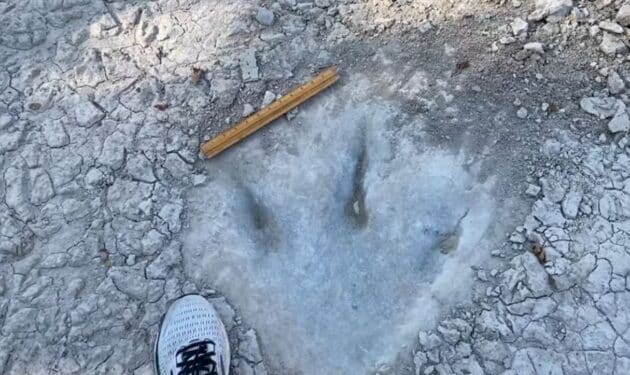 Although the ongoing drought in the American West has been awful for a number of reasons, it looks like there are also some positives. Specifically, the Paluxy River in Texas has dried up and in the process revealed a series of dinosaur tracks!

The tracks, which are approximated to have been 113 million years old, were mostly made by an Acrocanthosaurus according to NBC. This particular dinosaur was a theropod that weighted 7 tons and stood 15 feet tall. However, it’s unknown just how many of these tracks were located – and whether or not they will remain visible for long.

As noted via Stephanie Salinas Garcia, a spokeswoman with the Texas Parks and Wildlife Department:

“With rain in the upcoming forecasts, it is anticipated that the tracks uncovered during the drought will soon be buried again,” she said.

With that said, here are some images that were taken of the dinosaur tracks in the Texas river:

The Paluxy River is specifically located in Dinosaur Valley State Park in Glen Rose, Texas. Unfortunately, the drought has been otherwise harmful to the area. This drought has been described as an “exceptional” drought and as such the area has seen “historically low water levels and shortages to widespread tree death and crop loss.”

Otherwise, with “normal conditions,” newly-discovered tracks are often “filled in with sediment – a condition that helps protect them from natural weathering and erosion,” as explained by Stephanie Salinas Garcia. But again, due to the exceptional drought, this doesn’t appear to be possible with the newly-discovered Acrocanthosaurus tracks. In any case, it’s interesting to see that new tracks are still being discovered in the area. Many dinosaur tracks have been discovered in Dinosaur Valley State Park since at least the early 1900s. The fact that we’re still finding such incredible footprints left behind by the dinosaurs to this day is certainly amazing. And, despite the devastating nature of this ongoing drought, it does seem to bring some light to the situation.