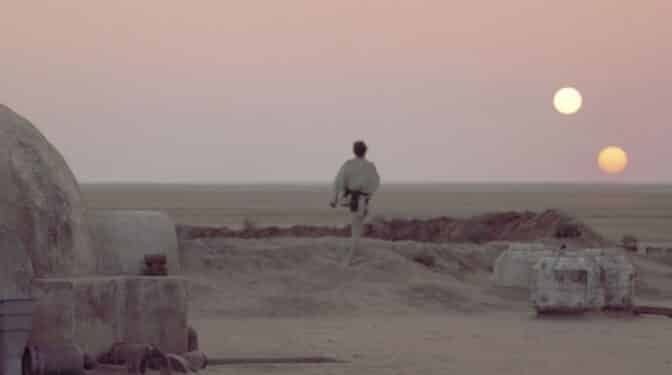 The Star Wars film franchise has introduced a wide variety of iconic settings and planets throughout its history. This includes the desert planet Tatooine, where audiences first met Luke Skywalker in 1977. The planet, which is covered in sand, features a memorable pair of suns that accompanied some of the greatest shots in Star Wars. Now scientists have confirmed there is a planet in real-life that’s very similar to Tatooine.

As explained by SciTechDaily, this actually isn’t the first discovery of this planet, known as Kepler-16b. It is, however, part of a new process in which scientists were able to confirm and identify the planet and the two stars it orbits. This is a new technique known as the radial velocity method.

Here’s how they described the process:

“The radial velocity method involves analyzing the spectra of light produced by the stars. Astronomers gather spectra data through telescopes on the ground – in this case, from a telescope based in France, the Observatoire de Haute Provence. That spectra data graphs into a line, but the line “wobbles” as the planet orbits around the two stars, producing a shaky line in the spectra of light. The wobble indicates a planet is there, and astronomers can use it to derive a number of other pieces of information about a planet, including its mass.” The planet known as Kepler-16b was actually first discovered by an alternate method known as “transit method.” This method operates quite differently, making this the first time such a planet – known as a circumbinary planet – had been discovered via the radial velocity method.

It’s expected by scientists that this method will be useful in locating other planets that might be more habitable than Kepler-16b, which is mostly made up of gas, and it could lead to the discovery of new life. Indeed, perhaps there is a proper real-life Tatooine out there after all.