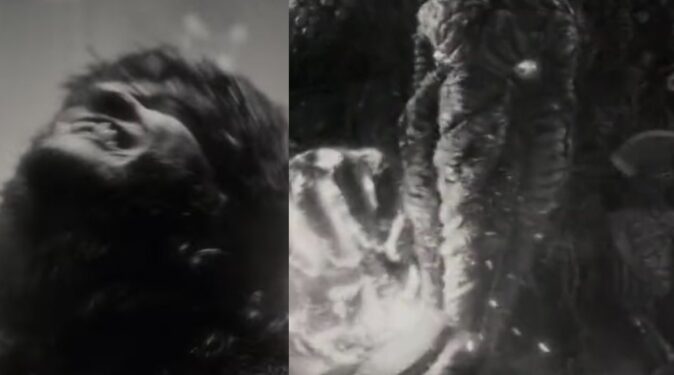 The Marvel Cinematic Universe has been expanding in surprising ways over the last few years. We’ve recently seen the release of Doctor Strange in the Multiverse of Madness – which brought a portion of the MCU closer to Sam Raimi’s distinct style seen in films like The Evil Dead. Now the MCU is taking their approach with fan-favorite horror characters like the Werewolf by Night a step further. As you can see below, a new trailer has been released for the Disney Plus Werewolf by Night special. And, judging by the look of things, this will be a fantastic throwback to classic horror.

Fans have heard that Werewolf by Night would be a proper Halloween special for quite some time. But this certainly goes beyond anyone’s expectations. The trailer reveals that the special is in black-and-white, with a look that feels eerily similar to classic films like Dracula and Frankenstein, or perhaps more appropriately The Wolfman. This is similarly demonstrated with the special’s vintage-looking title card. And, as you can see below, the special also looks quite thrilling and horror-focused (with that signature slice of MCU humor for good measure.)

With the special scheduled for next month – fans won’t have long at all to wait. Especially those who’ve been eager to see how the MCU would utilize such a fan-favorite niche character like Werewolf by Night. Furthermore, for fans that keep their eyes extra focused, the trailer also reveals that the beloved monster character Man-Thing will also be appearing.

Here’s the new official trailer for the Werewolf by Night special:

The upcoming Werewolf by Night special was directed by Michael Giacchino. The screenplay was written by Taboo Nawasha and Benjamin Jackendoff.

Fans will be able to view the Werewolf by Night special next month on October 7, 2022 via Disney Plus. Stay tuned to ScreenGeek for any additional updates as we have them. As for now, however, it certainly looks as though this year’s Halloween season will be filled with all sorts of exciting treats.