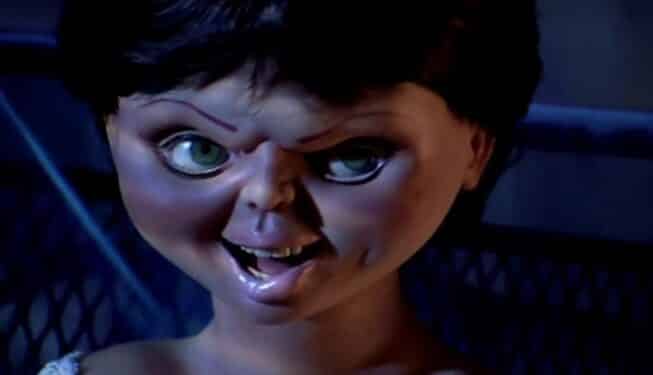 The Child’s Play franchise was revived most recently with the television series Chucky last year. The new series follows the events of Cult of Chucky while introducing a number of new characters. Furthermore, fans will recognize other characters from past entries in the franchise. Now the second season will be doing the same – and some newly-surfaced images have revealed an exciting surprise. As it turns out, the black-haired doll that eventually became the vessel of Tiffany in Bride of Chucky will be making a return!

This has been confirmed via SFX Magazine where several Chucky Season 2 photos were shared. Now, as you can see below, they’ve made their way onto social media. Fans will notice characters from both the original season and the teaser trailer for Season 2. And, of course, they’ll also notice the black-haired Tiffany doll that will be making an appearance.

It’s unknown how this doll will play a role, and whether or not it’s the same Tiffany doll or a different one from the same brand. And, if it’s the latter, it could shed some light on many details fans have been wondering about for years. After all, unlike Chucky who we know to be a Good Guy doll, we know very little about the bridal doll that Tiffany possesses. She seems to be a similar toy with recorded lines – but that’s about it. This also confirms that the new season of Chucky will be utilizing the Tiffany doll (or dolls) to a much greater extent.

The cast for the new season includes the return of Brad Dourif as Chucky and Jennifer Tilly as Tiffany. Zackary Arthur, Björgvin Arnarson, Alyvia Alyn Lind, Fiona Dourif, Alex Vincent, Christine Elise, and Barbara Alyn Woods will also return. Devon Sawa will be rejoining the cast as a new character this time around while Lara Jean Chorostecki has been cast in an undisclosed role. Furthermore, Lachlan Watson will be playing Glen and Glenda. The cast also includes Meg Tilly, Gina Gershon, Joe Pantoliano, Tony Nappo, and Sutton Stracke.

Fans will be able to see Chucky Season 2 and how it continues the fantastic storyline when it premieres on both USA and SYFY on October 5, 2022.