How The ‘Chucky’ Season Finale Sets The Stage For Season 2 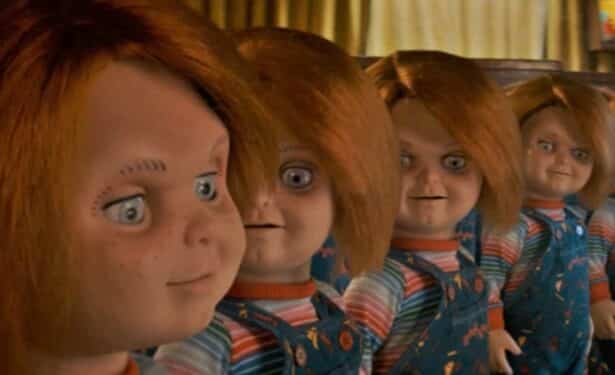 It’s a great time to be a Child’s Play fan. After years between movies, we’re finally seeing the Chucky narrative unfold at full speed thanks to the brand new TV series that’s been airing on both Syfy and USA. In fact, it’s just been announced that the series has been renewed for a second season. With the way the first season of Chucky ended, the story could still go literally anywhere. Now let’s dive into the Chucky finale and see how it sets the stage for Season 2.

As fans that have watched the series already know, Chucky has been tying together characters and plots from all seven original films. In particular, the series heavily follows the ending from Cult of Chucky in which Nica Pierce is possessed and Chucky reveals he now has multiple vessels. Andy and Kyle have since been tracking down the extra vessels, while the show’s main Chucky causes chaos in Hackensack, New Jersey. In particular, the finale reveals this main Chucky’s plan – to cause an innocent to commit murder, which would allow him to possess at least 70 more Good Guy dolls.

Tiffany, under the guise of her vessel Jennifer Tilly, announces that she’ll be sending these Good Guy dolls across the country. By the end of the episode, she sends a delivery guy off with the truck full of Good Guys. However, Andy Barclay steals the truck, and drives off with the inventory. It isn’t without a twist, however, as it’s revealed that Tiffany’s second vessel – her iconic doll counterpart – has also hitched a ride on the truck. She holds Andy at gunpoint and forces him to keep driving.

Meanwhile, Tiffany’s human counterpart has been up to something much more disturbing. She’s taken a liking to Nica, who has slowly been fighting Chucky for control of her body. In an effort to make sure Chucky can’t hurt her, while keeping Nica alive, Tiffany comes up with an awful plan. She actually amputates Nica’s arms and legs. It’s a horrifying sight and one can’t even begin to imagine what kind of condition she’ll be in for the second season.

As for our main trio of teenagers, they’re all alive and well. They visit the graves of Logan, Bree, and Junior who have all died throughout the series. But the three know that they’ve made close connections with one another, and that no one else will quite understand their story. This includes their teacher, Miss Fairchild, who is watching the group in the distance. Similarly, there’s another individual watching the trio, although it’s not clear who. We only see their gloved hand clutch a nearby tree before the shot ends.

While the Chucky finale wrapped up plenty of storylines, it also brought many new plots to the forefront. With various Chuckys, Tiffanys, and so many characters in various states of trauma – it’s clear the series could still go virtually anywhere. As such, it’ll be exciting to see what’s being cooked up for the next season.

The second season of Chucky is scheduled to premiere at some point in 2022. As such, fans can likely expect production to start at some point in the coming months – so stay tuned to ScreenGeek for updates as we have them.