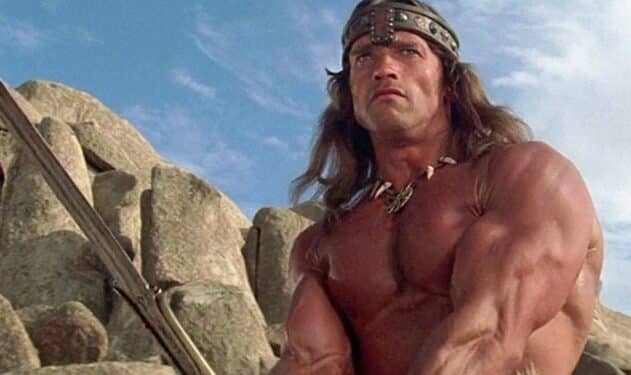 It was first announced in 2018 that a Conan the Barbarian TV series would be entering development. This was no doubt exciting news for fans of the franchise. With books, comics, and two different movie continuities to pull inspiration from – the possibilities seemed endless. Unfortunately, the project which was first in development for Amazon Prime, did not progress. It was then moved by producer Frederik Malmberg to Netflix in 2020. And, while it’s unclear what the status of the show is now, we have more information regarding its cancellation at Amazon. It appears that they passed on the project over concerns with “toxic masculinity.”

This was reported via Midnight’s Edge founder Andre Einherjar on YouTube. According to Einherjar, Amazon wanted the Conan the Barbarian series to rival Game of Thrones as the platform’s more adult-oriented fantasy series. Meanwhile, their Lord of the Rings series would be more family-focused. This was allegedly the plan made by Jeff Bezos himself as he explained below:

“[Bezos] wanted something which would enable Amazon to dominate the fantasy market the same way Game of Thrones had done for HBO. To make that dominance complete though, they weren’t looking for just one Game of Thrones, but two. One for the family market and one for the more adult market. One that would quite literally capture the exact same market that were engrossed in Game of Thrones.”

And, after explaining that Conan the Barbarian was intended to take the Game of Thrones market, he had this to say about how great the show’s development was going:

“It was the perfect property to fill the same need as Game of Thrones and they had the perfect showrunner for it, one Ryan Condal, then of Colony fame,” Einherjar details. “And the scripts he had written were extremely true to the original Robert E. Howard stories and according to everyone who read them amazingly good.”

Unfortunately, he claims that the executives involved with the series at the time were fired during the #MeToo movement. They were replaced by Jennifer Salke who decided that Conan the Barbarian included too much “toxic masculinity.”

“But then the executives who had commissioned Conan in the first place were #MeToo’d and replaced with Jennifer Salke. She came in to clean up Amazon both in terms of culture and content.”

After she canned the Conan show, she replaced it with The Wheel of Time. Allegedly, she further made The Wheel of Time “even more female-centric than it already was just to be sure there would be absolutely no toxic masculinity.”

“Where others saw the next Game of Thrones in Ryan Condal’s Conan scripts, Jennifer Salke saw only toxic masculinity. As such Ryan Condal was fired, Conan was scrapped, and Jennifer Salke picked The Wheel of Time to be Amazon’s more adult-oriented Game of Thrones replacement. Although she made sure to make it even more female-centric than it already was just to be sure there would be absolutely no toxic masculinity.”

As such, it’s unclear at what stage the Conan the Barbarian series is in at Netflix. It’s very possible that they’ll simply pass on the series as well. But at a time when well-known IPs are some of the most profitable sources of income for the entertainment industry – we likely still haven’t seen the last of Conan.