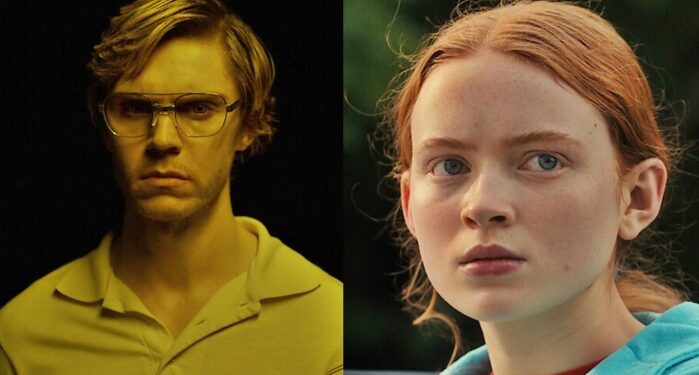 With the wait for Stranger Things Season 5, it looks like fans are back to watching the most recent season of the hit Netflix series. However, some fans have been tuning in because they believe they’ve spotted a character dressed up like Jeffrey Dahmer – the real-life serial killer that Netflix recently made a different series about. The theories surrounding the possibility that Stranger Things features a Jeffrey Dahmer cameo have now been popularized by a viral TikTok video.

As you can see below, the TikTok video focuses on a scene where Max is getting off a school bus. Suddenly, however, the Stranger Things video begins to focus on a background character – one that resembles the aforementioned Jeffrey Dahmer.

It then cuts to a clip from Dahmer – Monster: The Jeffrey Dahmer Story, the new docuseries all about the titular serial killer.

Although there are similarities between the background character and how Evan Peters appears as Jeffrey Dahmer, it’s incredibly unlikely that there’s any intentional connection. After all, this scene takes place in 1984 in a fictional town named Hawkins. The location nor the date do not add up for this character to actually be Jeffrey Dahmer. Of course, that hasn’t stopped a massive number of TikTok users from believing the theory.

As it is, that’s just how many average citizens would have dressed in both the 1970’s and 1980’s. It goes to show, then, just how easily a serial killer like Jeffrey Dahmer managed to blend in with the rest of society at the time. It also proves just how social media can spread any kind of information – legitimate or otherwise.