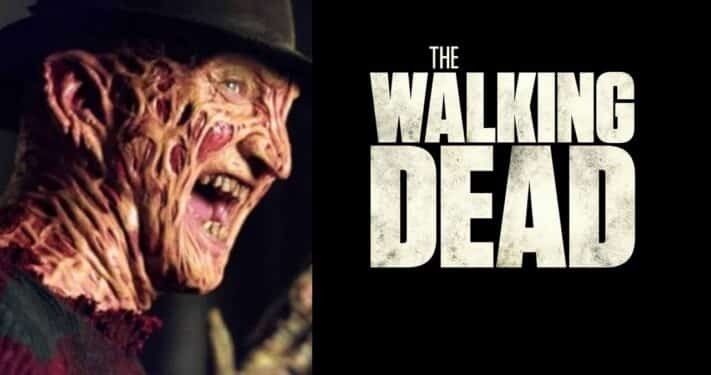 The fan-favorite television series The Walking Dead is finally coming to an end. While the franchise will continue with a number of spin-offs and other such media, it’s certainly still sad to see the flagship series air its final episodes. Nevertheless, executive producer and special effects artist Greg Nicotero is still making sure fans are having fun. This is evident with the brand-new Freddy Krueger reference that many fans have spotted while watching one of the latest episodes of The Walking Dead.

At one point, survivors Daryl and Maggie with the rest of their gang must travel through a sewer. On their way through the dark and dirty environment, they come across a walker that many viewers will recognize. It looks incredibly like Robert Englund’s Freddy Krueger – including the burned head and striped sweater.

While it might blend in with the scenery for more casual viewers of The Walking Dead – horror fans could spot the Freddy Krueger zombie a mile away.

Here are some photos of the Freddy Krueger “walker” below in addition to fans’ reactions:

Did you catch the Freddy Krueger Walker? #TheWalkingDead #TWD pic.twitter.com/Hrp2zIGjLP

Greg Nicotero has a rich history with the horror genre, as does many other cast and crew members of The Walking Dead. As such, it isn’t any surprise that he’d want to pay tribute to such an incredible genre icon as Freddy Krueger with one of the final episodes of the show. In fact, there have been plenty of similar references throughout the show’s run. With so many zombies that need to be made up with every episode – there are certainly tons of possibilities for fun Easter eggs and references among them.

Many fans will recognize nods to such hits as Creepshow, RoboCop, and even Lucio Fulci’s iconic film Zombie, which was released in Italy as an unofficial sequel to Dawn of the Dead titled Zombi 2. So, while The Walking Dead is an example of just how far the horror genre has evolved over the years, it’s great to see it pay tribute to some of the classics.