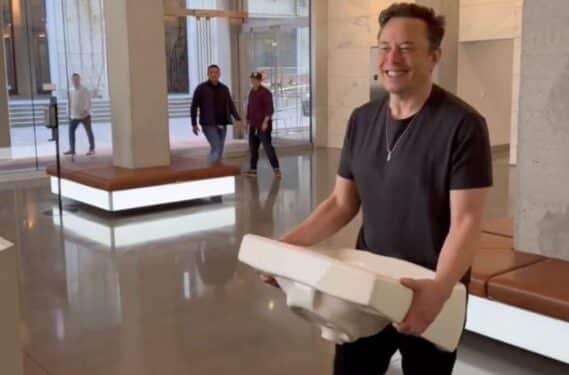 We’ve been waiting for months to see what would happen. Now Elon Musk has officially began his takeover of Twitter. In fact, he’s already made some major moves with the massive social media platform. Specifically, it appears that he has already fired CEO Parag Agrawal, Chief Financial Officer Ned Segal, and several other top executives at the company.

The Wall Street Journal reported as much, including the removal of Twitter’s top legal and policy executive, Vijaya Gadde, as well as their general counsel, Sean Edgett. For the time being, however, the spokespeople for Twitter are said to have no comment on the situation.

As you can see below, Elon Musk has already visited the Twitter HQ. He shared a humorous post on the social media site to let it “sink in” for his followers. In a play on words, Elon Musk can actually be seen carrying a sink around the building.

The deal for the takeover first started in April after Elon Musk made an offer to purchase Twitter for $44 billion. However, he soon after had concerns regarding bots and fake accounts. The social media platform’s lawyers soon suggested that argument was for Musk to renege on his offer. So, with that in mind, this moment brings a long legal battle to a close.

Of course, there’s still plenty of work to do with Twitter. Especially now that Elon Musk has fired the top executives at the company. Between that a number of other financial issues, it will be quite a journey to see what happens with Twitter moving into the future. With that in mind, stay tuned to ScreenGeek for any additional updates as we have them. There will likely be plenty of major changes to report now that Elon Musk has completed his takeover of the massive social media platform.