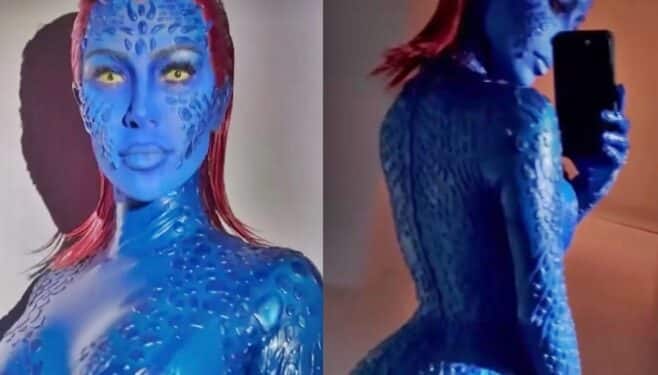 With Halloween upon us, everyone seems to be indulging the spirit of the holiday. This includes Kim Kardashian, who shared that over the weekend she transformed into Mystique from the X-Men franchise. In order to do so, Kim Kardashian put on a blue bodysuit that completely captures the appearance of the iconic comic book character.

The images were posted by Kim Kardashian on her social media profiles. The costume is not only skintight, but she took the opportunity to even wear a red wig, yellow contacts, and blue face paint to complete the look.

It’s certainly surprising and shows that even Kim Kardashian wants to celebrate the Halloween season by transforming into Mystique.

Here are the images that Kim Kardashian shared with her Mystique look:

Kim Kardashian dresses up as Mystique for Halloween. pic.twitter.com/z9VfynAba2

kim kardashian as mystique from x-men for halloween pic.twitter.com/O0DFdWepQX

It’s hard to deny that the costume looks fantastic. Many of her followers appear to agree. In fact, she even shared an additional video to Twitter. She suggested fans “make it happen” for her to appear in the Marvel Cinematic Universe as the character. Of course, given how well the costume turned out, it’s easy to see how well it’d work. Of course, it’s difficult to know what exactly Marvel’s plans are for the X-Men in their shared universe of films and television shows.

As of this writing, it seems like the biggest X-Men project in the works that we’re aware of is Deadpool 3. The film will not only include Ryan Reynolds once again as the titular character, but Hugh Jackman will be reprising his role as Wolverine for the highly-anticipated sequel. While it’s unlikely that there’d be room for Kim Kardashian to appear as Mystique in the mix, it’s great to see her showing her love for the character and truly transforming for the holiday. Stay tuned to ScreenGeek for any X-Men news as we have it.