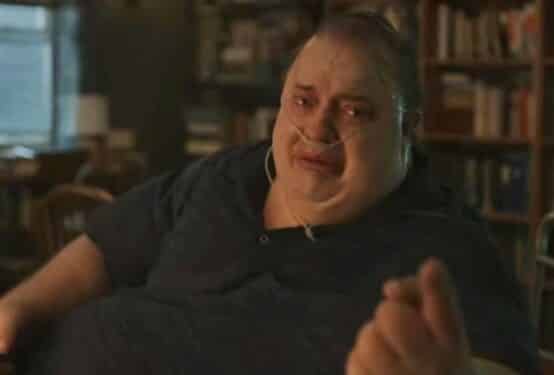 A new official trailer for The Whale starring Brendan Fraser gives us a more in-depth look at the actor’s performance that is getting all kinds of praise including a Golden Globe nomination for Best Actor. The actor is also getting early buzz for a potential Best Actor nomination at the Oscars – which he is currently the odds-on favorite to win.

It’s certainly been quite the comeback for the beloved actor – and a comeback that many fans on the internet have been rooting to see. The film received a standing ovation (for six minutes) during its world premiere back in September, something that moved the actor to tears in a viral video.

When discussing the role in a recent interview, Fraser had this to say about the main character, Charlie:

“He’s a man living alone, having regrets for choices he’s made and choices that life has made for him, and in his profound sadness, which he wears on his body as a manifestation of the trauma that he has endured, which he’s been trying to cure with consumption. It’s important to remember that he’s a human being, a person who deserves dignity and respect. While his body type differentiates from my own at present, I’ve had my own fluctuations in body weight, but it was helpful to put the two together to create Charlie from an authentic standpoint and get it as near to him as it was safe for me to do.”

The Whale was directed by Darren Aronofsky with a screenplay that was written by Samuel D. Hunter. The film was also based on Samuel D. Hunter’s play of the same name. In addition to Brendan Fraser, the film also stars Sadie Sink, who will be playing the daughter of Fraser’s titular character Charlie. The film also stars Hong Chau as Liz, Samantha Morton as Mary, Ty Simpkins as Thomas, and Sathya Sridharan.

The film is scheduled to receive a theatrical release in the United States on December 21st. Stay tuned to ScreenGeek for any additional updates regarding The Whale or star Brendan Fraser as we have them. It’s certainly great to see the beloved actor make his theatrical comeback.