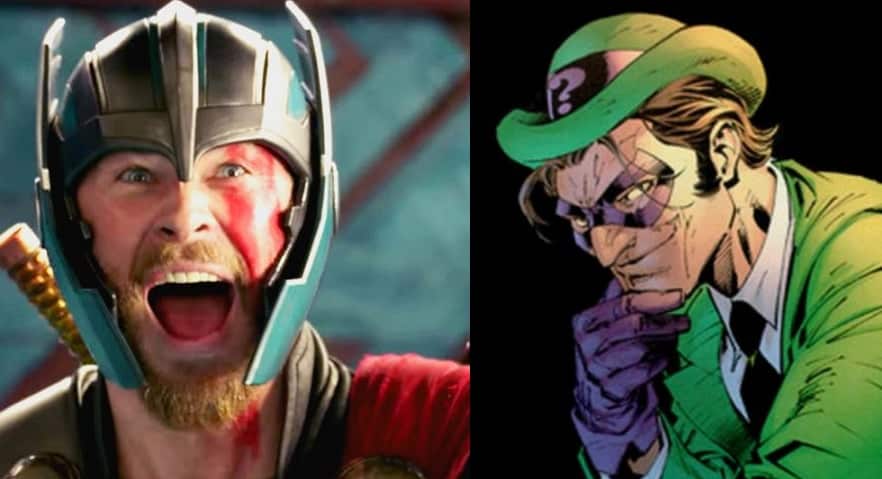 Chris Hemsworth was on The Jimmy Kimmel Show earlier this week, promoting his new film, Thor: Ragnarok. While he was there, he made a comment about wanting to play The Riddler for the DC Extended Universe. Actually, it was more of a joke. However, a lot of people would love to see the switch.

He was wearing a green velvet jacket when he came out on stage, so his wardrobe was ripe for the banter-making. When asked about it, Hemsworth stated that the jacket was a nod to Loki and Hulk. He then saw an opening for the joke and continued with:

“I have a Riddler audition after this, so…”

Of course, curious minds would like to know if a crossover is even possible, and Jimmy had the forethought to ask. Possible or not, the Australian actor wouldn’t directly answer Kimmel outright on whether he would take the opportunity if it arose. Instead, he made another joke saying:

“Depends on the cost, the payment. If it’s more than fifteen dollars an hour, sure.”

If Hemsworth were to join the DCEU team, he wouldn’t be the first one to do so. Laurence Fishburne plays Perry white in the DCEU and he has signed on to play Goliath in Ant-Man and the Wasp. Joss Whedon, who has directed The Avengers, has left Marvel to help with Justice League and Batgirl for the DCEU camp.

Though the two studios have shared actors and creators between them, Hemsworth has stated before that it isn’t legal for Marvel actors to make the switch to DC. He said there is a clause that disallows them from entertaining such an idea.

As the interview continued, Thor: Ragnarok came up and Hemsworth spoke about how different this film will be than anything they have made so far. He stated:

“We all had, I think, the same sort of want, need, and passion to change this up in a big way. I remember meeting with director Taika [Waititi] early in the process and he said, ‘Let’s just break everything we know. Destroy it. Rebuild it.'”

No matter where we see him, we’re just glad we get to. Thor: Ragnarok releases November 3rd.

Bruce Campbell on Why ‘Freddy vs. Jason vs. Ash’ Would Never Work
Making A Case For ‘Friday the 13th: A New Beginning’
Advertisement
Advertisement
To Top