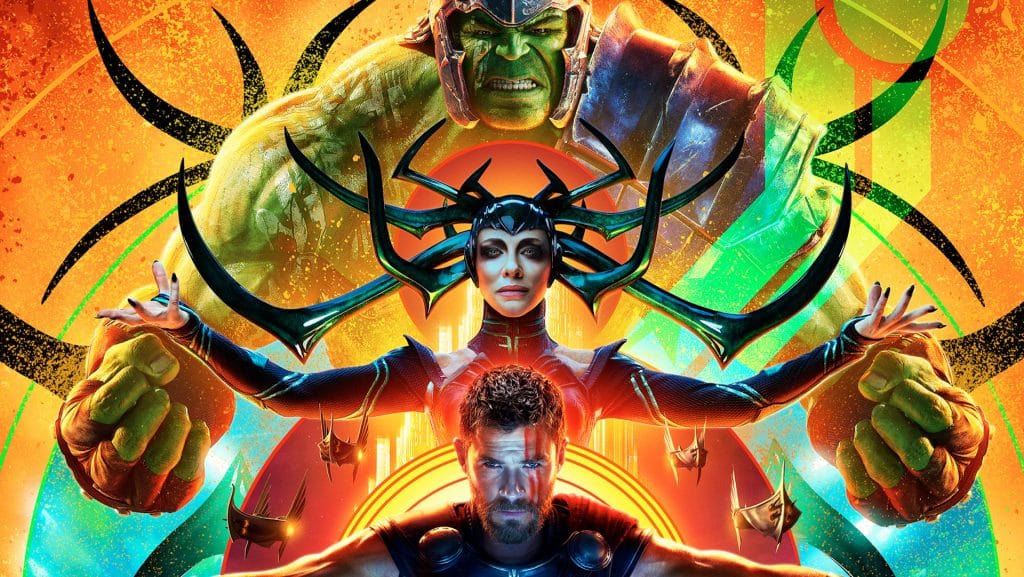 The Marvel Cinematic Universe continues to thrive critically and financially, but the Nords God Thor hasn’t shared much of that success. Both Thor and Thor: The Dark World are regarded as two of the weakest Marvel films (even though I find Dark World to be underrated). Thor: Ragnarok is a noticeable improvement, as it offers up one of the MCU’s most entertaining and unique entries, but is still held back by trappings of the Marvel brand.

After the powerful God of Death Hela takes over Asgaard, Thor: Ragnarok follows Thor and his quest to avenge his father Odin, which takes him on a cosmic journey along with a few familiar Marvel faces.

Thor: Ragnarok will receive a lot of comparisons to Guardians of the Galaxy, and that isn’t a bad thing. Quirky indie director Taika Waititi is easily the most interesting name to helm a Marvel film since James Gunn with the original Guardians, with Waititi having successfully matching an eccentric wit and heart in his films. Waititi, for the most part, is able to make this film in his own voice.

Marvel films have always had a sense of humor, but Ragnarok stands out as their funniest film yet. Waititi has an ability to make seemingly silly pratfalls work onscreen, with a lot of the humor being an interesting dissection of superhero cliches. From The Hulk to a few new faces (Korg steals the show), almost every character has their own great comedic moment to shine. Writer Eric Pearson also helps give Thor a more defined personality, one that is equally humorous while still having a human core.

Stealing the show  is Chris Hemsworth, who truly shines from start to finish. Hemsworth has shown comedic chops in the past, but never before has had quite this large of a role to shine. He’s endlessly charismatic, but also can be a lot more introspective when needed with the character. After two films, its good that Marvel has finally decided what to do with Thor as a character. Tom Hiddleston, Tessa Thompson, and Mark Ruffalo round out the Thor’s crew well, with their natural chemistry make for a fun “Revengers” team.

What surprised me most is how assured Waititi is as a visual stylist. This film has a unique cosmic look that is engrossing, and actually takes advantage of its 3D with some epic shots. The action here is also quite impressive, with Waititi’s steady camerawork and mix of slow-motion making for some grandiose moments. Hela’s raid of Asgaard is easily the most impressive Marvel action scene since the hallway fight in the first season of Daredevil.

It’s a shame that this film ulitmately dips into the familiar problems that have held back previous MCU films. Cate Blanchett brings some professionalism to the role of Hela, but as a villain she never feels defined. Her sidekick played by Karl Urban is easily one of the most useless characters Marvel has had in their films, floating around until he’s called upon to be a plot device. It would be one thing if the film didn’t dedicate much screen time to either character, but its peculiar because there is an effort to try and render both characters. Why Marvel can’t crack the villain code remains bizarre.

This may be controversial to some, but I think this movie drops the ball with its third act. Sure, it packs some impressive action that is sure to excite fans and dazzle the eye. However, its the cliched, bombastic finale we have come to except from Marvel – seemingly going through the motions. It also feels out of place tonally, as the film’s mostly humor-focused two-thirds are substituted for straight-up action.It left me feeling that Waitit’s comedic vision had some rigid compromises.

Even with my issues, Thor: Ragnarok is a satisfying superhero spectacle that also equals as one of the year’s funniest films. Make sure you stay after the credits, as audiences are greeted with a great set-up to Avengers Infinity War.