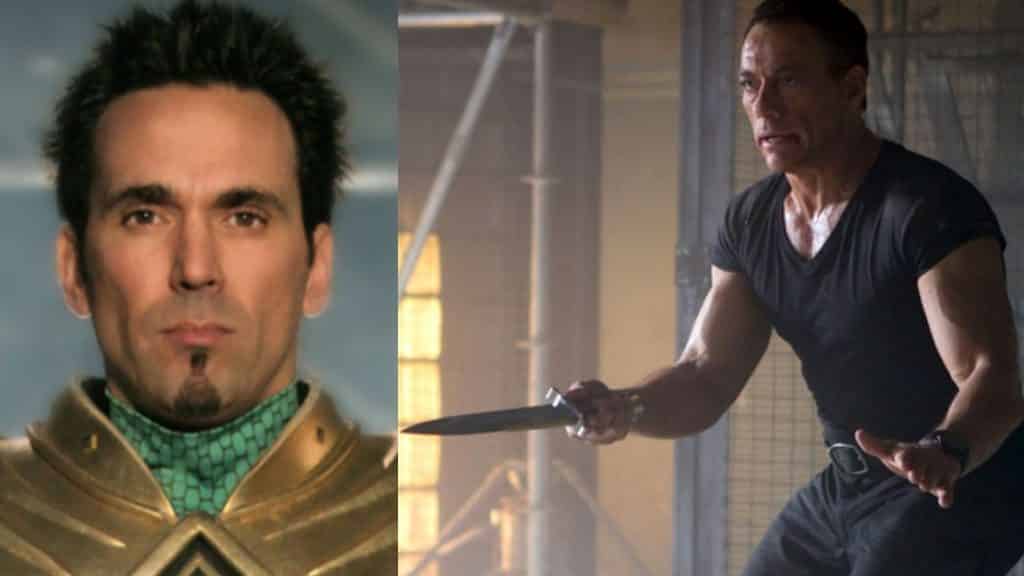 Footage has appeared online from La Mole Comic Con in Mexico City of Jean-Claude Van Damme locking horns with fellow martial artist Jason David Frank. For those of you unfamiliar with Frank’s work, he’s one of the few Power Rangers actors you would recognize if you passed him in the street. He played the first Green Ranger, Tommy. (The one who didn’t get jailed for murdering his housemate with a samurai sword…)

It transpires that there is quite the history behind this fight. Somewhat bizarrely, way back in 1995 (Google it, kids…) JCVD attended the premiere of the original Mighty Morphin’ Power Rangers movie. Whilst walking the carpet, he tried to engage Frank in some friendly banter, but Frank refused to speak with him. This then turned into a long-running feud between the two, much to the general public’s delight.

The highlight of this extraordinary enmity came in 2010, when Frank came out and challenged Van Damme to a televised MMA fight, which the fighter sadly declined. It appears that the reasons for this most recent flare-up stem from Frank being asked to share a dressing room with JCVD and his entourage by the event’s organizers.

According to Frank, when one of Van Damme’s people asked for a photo with the Rangers actor, Jean-Claude blew up at him. Things escalated further when Frank again bought up the subject of the proposed MMA fight, at which point Van Damme lunged at him. Security then intervened and parted the two, but not before Frank managed to successfully entangle the Universal Soldier star in a headlock.

Van Damme will be returning to our screens for his satirical Amazon series ‘Jean Claude Van Johnson’ on December 15. Frank continues to cameo in various Power Rangers projects, as well as doing some voiceover work for a Transformers animated series.

Check out the footage of their clash below (via The Blast):

Jason David Frank was interviewed by FloCombat about the matter and said:

“The promoter contacted me and asked if Jean Claude Van Damme could borrow my green room and share the room.The first thing in my head was yeah, he’s a big star, he doesn’t need to ask. I don’t hold a grudge. So I said yeah, I’ll share it no big deal. I never expected us to talk about old times or anything because it was so long ago and there was no response [about the fight].I didn’t even think he knew about it. So they asked me to use the room and no big deal.”

“All of his crew comes out and everybody has their cameras out and he has this professional camera, I’m not sure if he’s shooting a reality show or what, but all the cameras are on and he comes out of the room and straight up to me and he goes ‘hey you like writing articles about people, you want to beat my ass? You gonna apologize for that?’ and I said nope. He goes ‘you think you can still beat my ass?’ and I said yeah.”

Sadly, this isn’t even the most bizarre story you’ll hear about Jason David Frank this year. A man dressed up as The Punisher had a plan to kill the actor at a Phoenix Comic Con, but was arrested before anything could happen.

There was once a golden era when Hollywood’s fallen martial arts heroes did exactly what was expected of them. You know? Like maintaining a tremendous yearly output of ‘straight to DVD’ nonsense. Or a touch of messy drunken fighting with bouncers in the wee small hours? Perhaps the odd voice-over in a summer kids movie. But the times they are a’changing…

Take Dolph Lundgren, for example. Rather than continuing his record-setting run of garbage D-list European movies, he’s gone and negotiated his way back into mainstream cinema. Or Steven Seagal. Packed his bags and moved to Russia to pursue his lifelong ambition of international political commentary. It’s all very disappointing.

Thankfully, Jean-Claude Van Damme is still around to maintain the high standards we demand from our faded fighting icons. Belgium’s most famous son continues to live the life we mortals can only dream of. Pausing his new films at the halfway point to bare his soul to straight into camera and apologize for being a bad father. Stripping half naked to promote low alcohol beer for television. Picking fights in public with Power Rangers…. Wait, what?

With Dolph Lundgren having successfully clawed his way back into mainstream cinema, and Steven Seagal moving to Russia to pursue his lifelong ambition of playing becoming a full-time political commentator, it’s fallen to Jean Claude Van Damme to maintain the crazy-ass lifestyle of a ‘straight to DVD’ martial arts star.

What’d you think of the fight? Are you a fan of the actors? Tell us your thoughts in the comments!