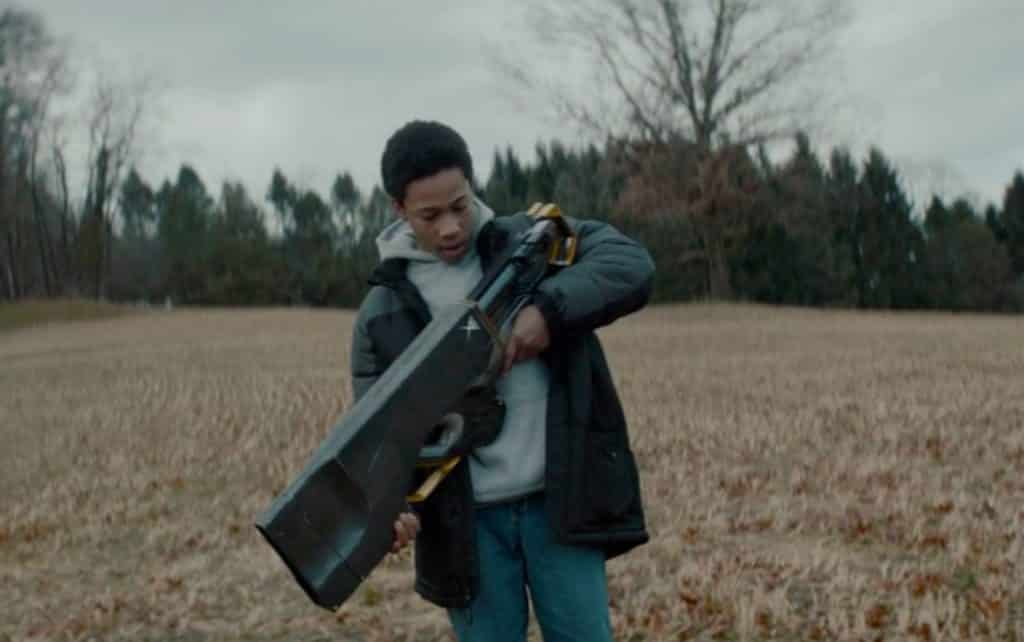 Following the massive success of TV series Stranger Things, Kin is the latest science fiction adventure film. While the genre has proven to bring a great balance of excitement, charm, and heart, Kin features none of that, being one of the year’s biggest missed opportunities so far.

Based on the short film Bag Man (directors Johnathan and Josh Baker, who also directed Kin), the film follows Elijah, an outcast who discovers a mysterious weapon one day. When he and his brother get caught up in a dangerous chase against gangs and alien soldiers, Elijah is forced to save the day while learning about his past.

On concept, Kin has a lot of promise. Both directors clearly have a lot of passion for the project, being sharing there inspirations that range from The Sword in the Stone to Halo. They clearly crafted this film with a goal in mind, but its also evident that the execution misses the boat in several aspects.

Many have cited that Kin‘s problematic aspects start with its base premise, as its essentially about a kid who finds a giant tool of destruction. I am not a fan of the running trend of injecting politics into film reviews, but I also found the premise deeply problematic. In films like this, the discovery of a mythical object often comes with a great sense of adventure, but when its just a giant gun, its hard to feel much excitement for a machine of death.

While this idea could’ve worked if the film went for a straight fantasy set-up, Kin has massive tonal issues running through each scene. I appreciate that the film tries to mix its genre aspects with a real-life setting and real consequences, but in contrast with the fantastical set-up, its just an incredibly awkward mix. If the movie wanted to be realistic, it needs to also address the weight of Elijah murdering people with a gun. Perhaps a deft script could meld the different ideas, but Daniel Casey’s script struggles at every turn.

The heart of this film is based around the brother relationship between Elijah and his brother Jimmy, whose ultimately the one to blame for the gang being after them. Not only do the two have no chemistry together, but its impossible for the bond to be very effective when Jimmy is such an unlikable character. Jack Reynor’s performance fails to breath much charm into the character, making his bad choices throughout the film all the more problematic. The performances across the board underwhelm, with talented actors like James Franco, Dennis Quaid, and Zoe Kravitz strapped with thankless roles and wooden dialogue.

Kin does get some life during its third act, with its low-budget action being effective done by the Baker Brothers, but it proves to be too little to late. This failed science fiction adventure shows that the best intentions don’t always lead to a successful film, but I hope the Baker Brothers learn from their debut outing.

Continue Reading
You may also like...
Related Topics:James Franco, Kin

‘Ozark’ Season 2 Review: These Are Not The People To Do Business With
‘The Predator’ Review: One Beautiful Mother F*cker
Advertisement
Advertisement
To Top