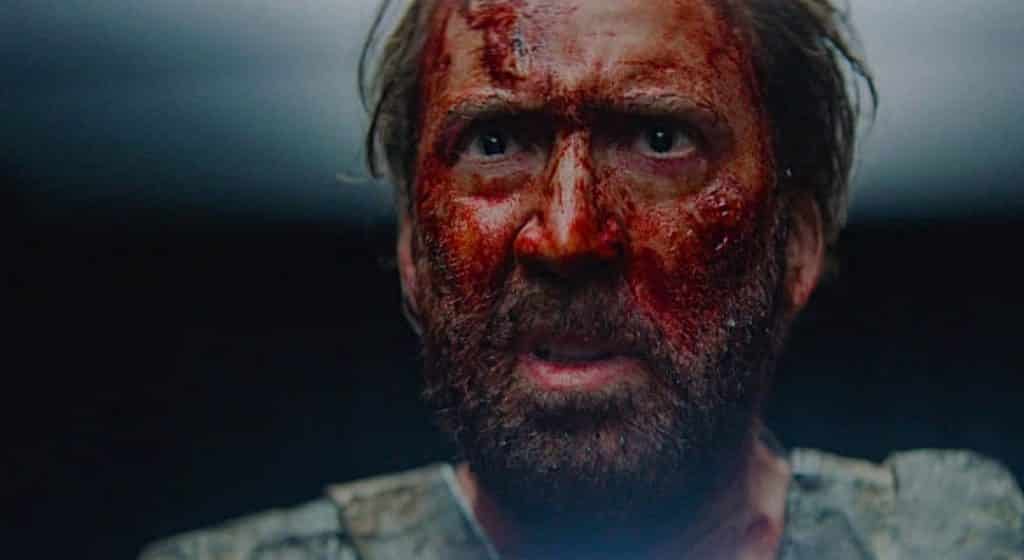 The film is said to be something that would fit Cage’s off the wall talent like a glove. After seeing Mandy, I would have to agree. Yeah, this movie is fucking nuts and I loved it.

The trailers and other forms of promotion don’t really go into what the movie is about mainly because of the simplicity of the plot, but that’s in no way a negative. The plot follows Red Miller (Nicolas Cage) a lumberjack with little to say and who loves his style of baseball t-shirts almost as much the woman he loves, Mandy Bloom (Andrea Riseborough).

Mandy, an artist, and lover of fantasy novels, becomes the fascination of cult leader Jeremiah Swan (Linus Roache). After a series of unfortunate events for the lovely couple at the hands of Jeremiah’s cult members, Red seeks a blood-soaked revenge with the aid of one of the most badass battle axes I’ve ever seen.

So, the plot of the film isn’t really the most important part and shouldn’t be the focus. The film is more of a visual story that is well crafted by Cosmatos’s auteur direction and should be heavily applauded for its marvelous style of beautiful brutality.

The movie is something that should be seen by anyone that calls film and cinematography an art form. Mandy borrows tropes and characteristics from classic B-Movies that were only known through word of mouth or late-night showings on Cinemax to set the tone of the dark film. The vibrant colors of red, green, and blue really stick out in magnificent fashion. There’s a use of strobe light with a heavy emphasis on blue lighting that intensified a kidnapping scene and gave me chills up my spine until its conclusion.

Many of the shots in the film showed deep influences of heavy metal mythology. To paint a picture, it’s like taking two eye drops of acid, flipping through some of the best heavy metal albums ever created, and cranking the awing madness to an eleven. The intensity is not for the faint of heart but gives visual aid of a revenge story piggybacking on the idea of love and giving it an artistic look that has never been done before.

Whenever a new Nicolas Cage film is released, the actor is always the unintentional attention that takes away from the rest of the cast, but this isn’t the case with Mandy.

Don’t worry, I’ll get to Cage’s performance in a moment.

Andrea Riseborough’s performance is nothing short of hypnotic. Her portrayal of Mandy gives off an almost goddess-like performance. It’s the way she looks at the camera or carries herself in the film that shows why she is the center of Cage’s character’s world. Another great performance comes from Linus Roache.

His acting recalls the interviews I’ve seen from some of the most notorious cult leaders like Manson, Jones, and others who swear themselves to be the second coming of Christ. Yet, he’s able to show the frailty of these cult leaders and how easy it is to break their egos. Roache even looks like a pussified version of Iron Maidan’s Eddie.

Now the part that you’ve been waiting for. Nicolas Cage is awesome in this film.

The man is known for going overboard with his acting in many of his previous films, but Mandy was the perfect calling for that. He does a lot without speaking, and yes, there is a full-on Cage-screaming-out-of-his-mind scene in the movie. The MVS (Most Valuable Scene) involves the man, the myth, the legend at his finest.

The scene calls for Cage to emote with great sadness and fire in his eyes that brings you into the mindset of the character. Cosmatos uses the simplest technique of reflecting smoldering fire on Cage and in the background so god damn well that I could feel the burning flame of vengeance emanating from the actor.

The only gripe that I have is that I haven’t had the opportunity of seeing this film in theaters with like-minded folks…yet.

The collaboration of Nicolas Cage and Panos Comsmatos is a match made in Heavy Metal heaven. The director is working with a higher level of style that is refreshing but also pays homage to great genre films from the past. Normally, new directors hit a rough patch with their sophomore film but Comsmatos only proved that he is someone to be taken seriously when it comes to using surreal art in film. If I still haven’t convinced you, I’ve got two words for you: chainsaw duel.

“You are a vicious snowflake.”