The Cinematic Evolution Of Dave Bautista

Ever since Dwayne Johnson managed to successfully ‘People’s Elbow’ his way out of the ring and to the top of the movie industry, there’s been a determined effort from the folks over at WWE to try and replicate the success of their most famous son. Attempts to insert wrestling headliners such as Triple H (Blade: Trinity) and Sheamus (TMNT: Out Of The Shadows) across Into mainstream cinema ultimately misfired, but more recently John Cena has managed to use his natural charm and no small amount of self-deprivation to carve out a high-profile career in big comedy blockbusters. Other than Johnson, the WWE’s greatest success in transitioning their roster into A-list talent happened almost completely by accident, back in 2014. With relatively no promotion or fanfare, 45 year old grappler Dave Bautista was cast in the role of Drax The Destroyer in James Gunn’s Guardians Of The Galaxy movie.

It was an announcement that met with little in the way of enthusiasm from any area.

For Marvel fans, the Guardians were hardly the biggest names they’d been waiting to see adapted by for the big screen, and the casting of a wrestler rather than an actor was perceived to be little more than a desperate attempt by Marvel to pull in the wrestling dollar. There was even less positive vibe in the wrestling community itself, where Bautista was largely seen as past his best. An ageing has-been who was struggling to keep his physique in shape, and should have already been retired into a supporting backstage role.

Whatever James Gunn’s faults and mistakes (of which there are no small number) you can’t detract from the unbelievable success of the original GOTG movie. Gunn managed to take toxic material such as a talking raccoon and a sentient tree, and seamlessly blend them into the rest of the MCU. And in Bautista, James Gunn clearly saw something that the majority of his detractors did not. The guy could act….

Early attempts by Bautista to get into mainstream acting had met with little in the way of success. There were brief cameos in TV shows Chuck and also Smallville, where he played a disposable Z-list villain. Further bad guy appearances in films such as The Man With The Iron Fists and Riddick did little to help his cause. It seemed that movie producers only wanted Bautista for his physique, limiting him to the roles that had killed the potential movie careers of the majority of his fellow wrestlers.

Dave Bautista instead emerged from GOTG covered in glory, suddenly appealing to a whole new demographic. He was the perfect choice for a role that required utter deadpan and emotionless delivery, occasionally punctuated with sudden and explosive emotion. In the hands of another actor, Drax had the potential to be an unfunny and irritating supporting player, but Bautista emerged with some of the most memorable lines in the film, spawning an avalanche of hilarious memes on social media. 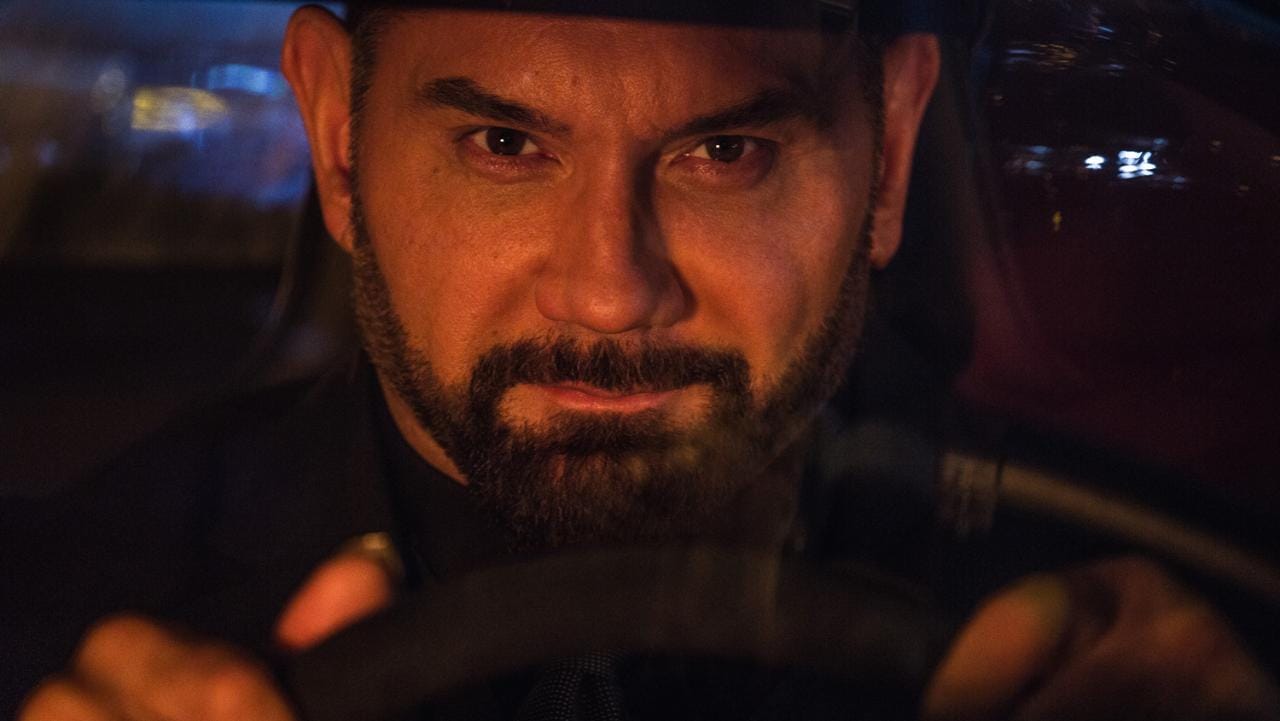 His sudden popularity immediately won him a part in the next Bond movie. The bad news, that movie was Spectre, rather than Skyfall. In Bautista’s defense, it was a role he simply couldn’t have turned down. With Sam Mendes and Daniel Craig persuaded to return to the franchise, and Christophe Waltz bought aboard to play the rebooted Blofeld, the film should have been gold. Sadly, his character Mr Hinx is as flawed as the rest of the movie. Once again Bautista was cast for his looks rather than his talent, resulting in a forgettable and totally un-engaging performance.

Putting the sour taste of Spectre, and an equally painful turn in the Kickboxer reboot, Bautista immediately opted to do something quite unexpected. His decision to play an emotionally-scarred forces veteran in the low-budget thriller Bushwick was one of the best of his career. Watching him desperately trying to survive the outbreak of the second US Civil war, as well as accepting responsibility for an unwanted companion, his size and strength take a back seat. Bautista nervously twitches and mumbles his way through the duration of the film, trying to rationalize what’s happening and make it to safety in the face of overwhelming odds. Unlike Dwayne Johnson he’s not playing a bulletproof action hero, just a poor soul who’s staring down the barrel at a bullet with his name on it.

The doomed and tragic nature of Bautista’s portrayal of army veteran Stupe in Bushwick was immediately replicated in his turn as Sapper Morton at the start of Blade Runner 2049. Denis Villeneuve’s movie is a beautiful and haunting masterpiece, which the former wrestler again emerges from in glory. There’s a sense of utter tragedy surrounding Morton as he encounters Ryan Gosling’s robot-hunting cop at the start of the movie. This is only going to go one way, but after the inevitable happens, finding out the reasons for Morton’s brave sacrifice make his role in proceedings all the more pivotal and memorable.

Recreating his hilarious portrayal of Drax for the second GOTG movie, fans were no doubt expecting more of the same when Infinity War finally rolled into town. It’s true, once again Bautista easily stands out from the crowd and has some of the best lines in the movie, which is no mean feat given the immense size of the cast list. This time round though, it’s not about how many memes he would launch.

The heart-breaking twist at the end of the film leaves audiences with an entirely different memory of his character. There’s no comedy line, no noble utterance. It’s hard to say if Drax calling out to Quill is confusion or accusation. as he has realised what is taking place. Either way, it hits you. Hard. Right in the gut.

Having captured and broken hearts with a hat-trick of haunting performances, Bautista has now kept his tantalizing run going with his scene-stealing turn as Everest in the recently released Hotel Artemis. Another damaged and fractured individual, the hulking hospital orderly initially comes across as a bullying simpleton in a uniform. But his touching relationship with his boss (brilliantly played by Jodie Foster) betrays how badly he needs this job. The Artemis is his sanctum, his safe space. And he is prepared to fight every incursion and intrusion to his dying breath in order to try and retain the balance it brings him.

Bautista’s very public kickback to Marvel’s decision to fire James Gunn has proven somewhat decisive, not that he seems to care. His voice has been the loudest and most forceful in trying to defend the historic stupidity of his friend and colleague. And whilst many Marvel fans are in strong agreement with his opinion, others see his arguments and threats as unproductive and potentially harmful to the franchise.

At a late stage in the game, and against the indifference or hate of the film industry, Dave Bautista has managed to triumph in the biggest fight of his career. He has succeeded in winning over the hearts of both cynical critics and moviegoers alike. Because his height, build and ability to punch the living shit out of a man are a diversion. A misdirection. Because Bautista is an actor, a performer who can take words on a page and make an audience believe that they are a true story. And Hollywood is a better place because of that victory.