The comic book industry has never enjoyed such good times, with an endless range of different genres to choose from, and a huge variety of ways to access this available content. With so much choice and variety on show, it’s becoming harder and harder for artists and writers to make their mark on an audience. But that wasn’t always the case, and in the 80’s and 90’s, the men and women who created some of today’s most famous comic book characters were almost as iconic as stories they produced. It’s our sad news therefore to report that one of these notable illustrators is now no longer with us, as legendary 2000 AD artist Carlos Ezquerra, co-creator of Judge Dredd, has passed away at the age of 70.

We are profoundly sad to confirm that the legendary artist Carlos Ezquerra has passed away. It is difficult for us to put this into words, but we have lost someone who was the heart and soul of 2000 AD… https://t.co/FJI1K97SPh pic.twitter.com/fDKy47lTEr

Comics readers had already been shocked and stunned by the death of fellow 2000 AD artist Steve Dillon back in 2016. Dillon had been one of the creators of the Preacher comic, which has recently been adapted into a hit series by Amazon, and had also worked on the current Punisher imprint for Marvel Comics. The loss of Ezquerra could therefore not have come at a worse time, with the Spanish artist having been one of the biggest contributors in the creation of Judge Joseph Dredd, and his home of Mega City One.

Whilst it was artist Mike McMahon who had first drawn Joe Dredd for 2000 AD in the late 1970’s, it was Ezquerra who that was approached by Editor Pat Mills to expand and grow the world of Mega City One around their new character. His outrageous and often unsettling ideas for presenting a chaotic parody of modern-day America were largely unpalatable to writer John Wagner, but they soon became a big hit with the readers, ensuring that Ezquerra’s art was included in the majority of Dredd’s major stories.

His most famous run was on the lengthy Apocalypse War storyline, with his work also including Necropolis, Judgement Day and the Purgatory runs. 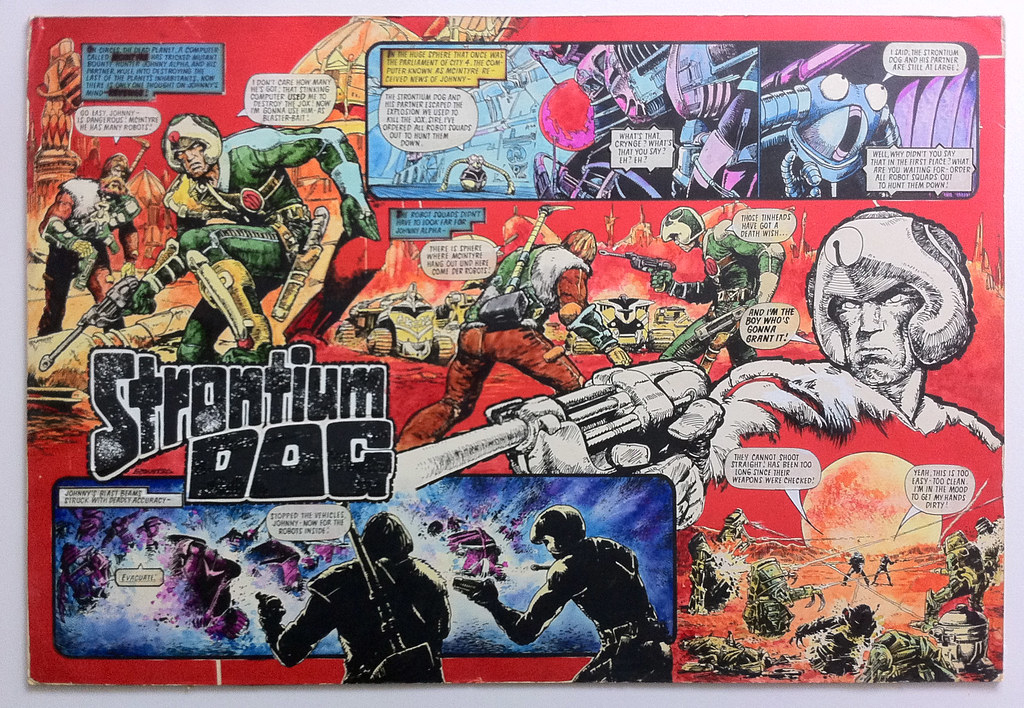 In addition to his contributions towards Judge Dredd, Carlos Ezquerra was one of the creators of another big 2000 AD fan-favorite, Johnny Alpha, the Strontium Dog. He also earned industry-wide acclaim for his incarnation of the Harry Harrison character, Stainless Steel Rat, who he based on Hollywood legend James Coburn. .In tribute to him, the character of Stogie, a companion of the robot-hunting Sam Slade, was given the full name Carlos Sanchez Robo-Stogie.

Ezquerra was fiercely protective of his work, and clashed with his masters at 2000 AD whenever he disagreed with their editorial decisions. When writer Alan Grant decided to kill off Johnny Alpha during “The Final Solution”, Ezquerra downed tools and refused to finish the story, eventually replaced by someone else. Both he and Wagner would end up entering into a lengthy financial dispute with the company over ownership of the Judge Dredd character, eventually forcing the two men out of the company.

With a new Judge Dredd television series currently in development, and Director Duncan Jones beginning work on a Rogue Trooper movie, there could be no more fitting tribute to Ezquerra than a Strontium Dog movie/TV show. Here’s hoping……..