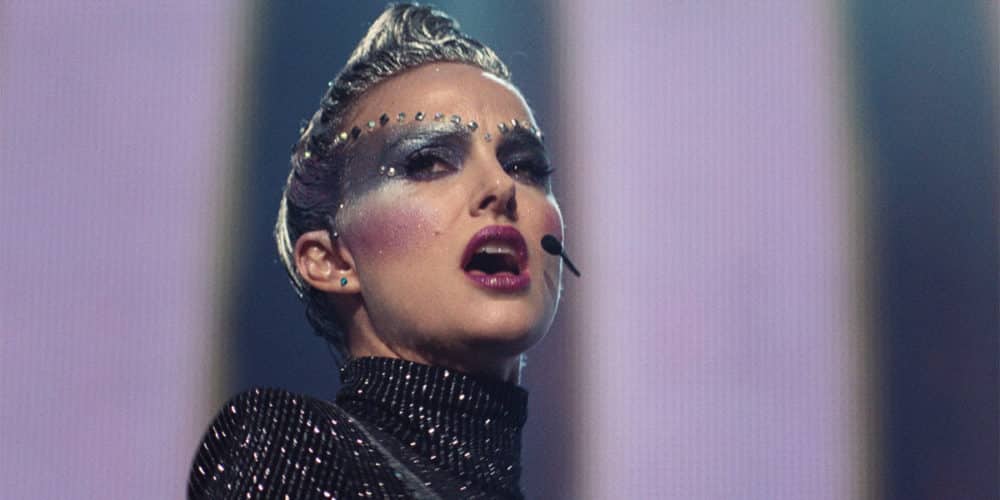 “All you need is an angle.”

Some films are content sticking to the status quo of filmmaking in order to create a solid product. Some filmmakers though verve into decidedly uncharted territory, shooting for the stars as they try to create something decidedly original. Whether you love it or hate it, Vox Lux is one of those films, with its combination of filmmaking styles and themes presenting a wholly unique look at stardom.

Vox Lux follows Celeste, a thirteen year old who turns her experience from a traumatic event into a rising career as a pop star. The film follows her through the birth and rebirth of her career, witnessing how the traumas of her past and the media spotlight of her present continue to take a toll on her.

Few films will linger with me as long as Vox Lux, so brazen in its craftsmanship and ambitious in its takedown of 21st century culture that it registers a profound impact. While I understand the divide it will cause between audiences, its one of my personal favorite films of the year.

Brady Corbet has worn a lot of hats in his career as an actor, writer, and director, but this is certainly the biggest impact Corbet has made with a film so far. From a filmmaking perspective, Corbet puts on a masterclass of different filmmaking forms, with overlying narration and constant aspect ratio changes being among the bag of tricks he has in his sleeve. It would be easy for all these techniques to overwhelm each other, but under his direction these aspects meld successfully. Pair that alongside Scott Walker’s score and Lol Crawley’s sprawling cinematographery, Corbert conveys a richly dark nightmarish-tone that lingers throughout.

That’s not to say Vox Lux isn’t without its humor or entertainment, as in writing a searing portrait of art, celebrity, and more generally our continually decaying society, Corbert creates a movie that celebrates its own excess. This film is in a lot of ways the evil twin of A Star is Born, where as that movie a soulful tale of music and the purpose we make it with, this film is a cynical look into the industry, where the art irrelevant compared to the angle you have to sell it.

This complex tonal balance is perhaps most apparent with Natalie Portman’s performance, with the star actress giving a larger-than-life performance as current day Celeste. From the heavy Brooklyn accent to the Kanye West-esque dialogue, I get where people can be turned away by the performance, but Portman knowingly embraces some of that lunacy to create some much needed brevity. Still, Portman is talented-enough to find the heart of the character, with cracks of her inner-demons and traumas slowly manifesting throughout the performance. Vox Lux cast is full of standout performances, with Jude Law, Stacey Martin, and Raffey Cassidy delivering great performances. Cassidy in particular is stellar, maneuvering the challenge of playing two separate characters with precision.

Perhaps where Vox Lux will divide audiences the most is the film’s use of traumatic events. These sequences are incredibly graphic and harrowing, but there purpose in the film are perhaps even more challenging. Corbet connection between these shocking moments and Celeste’s rise to fame is pronounced, raising dark questions about society and our moral decay in favor of the glamour and meaningless of the aspects of culture we celebrate. Vox Lux bold descent into these ideals pays off with one of the year’s most stunning achievements.

‘Spider-Man: Into The Spider-Verse’ Review: Fun New Take On Spider-Man Universe
‘If Beale Street Could Talk’ Review: The Best Drama Of The Year
Advertisement
Advertisement
To Top