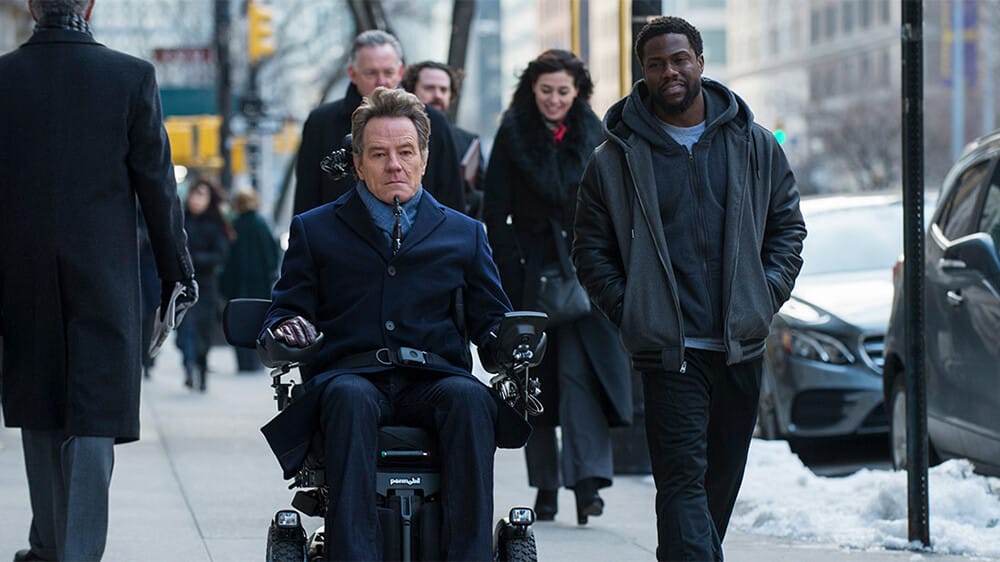 Despite recent controversy about troubling jokes and not hosting the Oscars, Kevin Hart is still one of the most beloved comedic stars in the industry. Hits like Jumanji: Welcome to the Jungle and Central Intelligence have gained him a massive fanbase, establishing him as one of the few A-list stars in the industry. Hart’s latest The Upside finds the star comedic actor trading his larger-than-life persona for something more grounded, but the results are more of a mixed bag.

The Upside is a remake of the massively successful foreign film The Intouchables, which grossed over 400 million worldwide back in 2012. This remake follows Dell (Kevin Hart), an ex-convict who stumbles upon a dream job when he becomes the caretaker for the rich Phillip Lacasse (Bryan Cranston), a quadriplegic who has begun to quit on his life. The two form a close friendship that helps them overcome their respective issues.

Originally premiering a year and a half ago at the 2017 Toronto International Film Festival, The Upside has had a tumultuous road to theaters. While the final product is surprisingly more cohesive than one could imagine, the film fails to recapture what made the original film work.

The Upside’s greatest strength lies in its cast. As someone who has begun to grow tired of Hart’s loud shtick, this is a refreshingly subdued performance by comparison. Resembling much more of an everyman, Hart is still able to deliver his charming persona while also matching it with some genuine acting chops during the film’s more dramatic moments. If anything, this film is a decent step towards Hart branching out his skill set.

Paired alongside Hart is Bryan Cranston, with Cranston as usual making the most out of the material he is given. Cranston conveys Phillip’s inner-turmoil with conviction, but also makes for a strong comedic partner alongside Hart. Their easy-going chemistry makes for genuine laughs, and the two form a very likable duo that make much of the movie a pain-less experience.

It’s a shame however that they are surrounded by a largely middling movie in its place. While The Intouchables was able to bring humanity to some of its more melodramatic beats, this film’s story feels stagnant and predictable. Everything feels too played-out, with Jon Hartmere’s script failing to give these actors much depth to work with. It’s almost criminal how little that a star actress like Nicole Kidman is used here, stuck in a thankless and paper-thin role that sums up the film’s deficiencies accurately.

Nothing about The Upsides execution rises past TV movie-level. Director Neil Burger has made some great films in the past(Limitless in particular is a standout), but his standard efforts here seem to be on auto-pilot. This remake may hit the beats of its original with some effective moments, but it fails to bring any genuine humanity or originality to the proceedings.

Continue Reading
You may also like...
Related Topics:kevin hart, The Upside