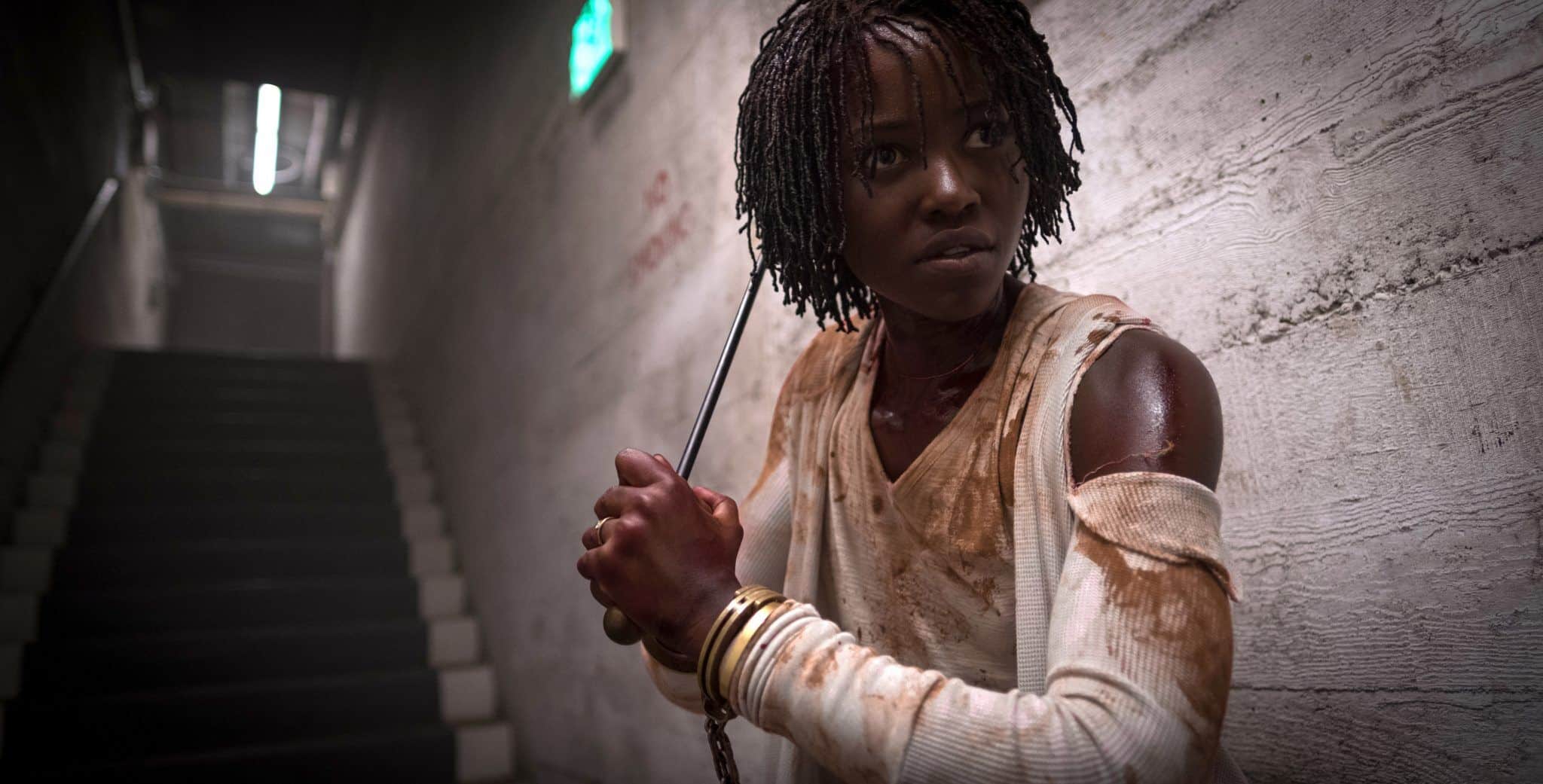 Writer and director Jordan Peele has become a serious force in the filmmaking world. The man’s talent for writing steered more towards comedy in his early days on MadTV and the widely successful Key & Peele show. It was when Blumhouse Pictures decided to take a chance on the comedic writer’s head-first dive into the horror genre, with Get Out, that history was made. Now, Peele is back with another stab at the genre with his latest film, Us. I was one of many critics that were blown away by Peele’s style and social commentary on the world around us and couldn’t wait to see what he did next. Us, his sophomore project, unfortunately, it’s not as entertaining as Get Out but still deeply profound and another great example of what this man has to say about society.

Us stars  Lupita Nyong’o and Leader of the Jabari Tribe M’Ba—I mean Winston Duke—as husband and wife Adelaide and Gabe Wilson. The two decide to get away for a while with their daughter, Zora (Shahadi Wright Joseph) and son Jason (Evan Alex) to their summer home in Santa Cruz. While on vacation, the Wilson family are terrorized by their doppelgangers. The premise seems simple as it harkens back to classic films like Sam Peckinpah’s 1971 film Straw Dogs or Michael Haneke’s 1997’s film Funny Games—which was remade by the director in 2007—but the film is so much more than a psychological thriller.

The writing is what one might expect from an Oscar-winning writer. Peele can still give a thought-provoking underlying message in the film through the power of horror. What he does differently this time around is makes the message open-ended, possibly conveying with many interpretations from the audience—which I’ll get to later. On the surface, Peele has birthed a new form of terror with the likes of the Tethered aka the antagonists of the film. There are many points in the movie where I was expecting some big reveal as to where the Tethered come from and exactly why they are terrorizing this family. The problem is that the thick opaque nature in the film almost causes the third act to crumble. Don’t get me wrong. The amount of intrigue kept my interest but could’ve used a better form of exposition other than a typical Bond villain dump. It’s not a deal breaker for the film but some of it could have used just a bit more retooling.

One factor of the film that cannot be denied is the masterclass of acting played out on screen. Lupita Nyong’o dominates every scene in this film and reminds me of why she won an Academy Award for Best Supporting Actress for 12 Years A Slave. The dual roles for her performance looked so effortless and convincing that I couldn’t fathom the mental process she had to go through and switch on the fly between takes. Also, that voice her character Red does is horrifying. Winston Duke as the father does his best at being the ultimate dad. He tells dad or bad jokes—I doubt there’s a difference—at the most hilarious and inappropriate times. Duke is also able to play his character in a more realistic manner as a father who understands the limits of his ability to be in charge which allows some of the female characters to shine. Speaking of, I loved the performance done by Shahadi Wright Joseph. This young woman was completely off my radar but not anymore. She follows closely to Nyong’o’s talent of playing dual roles so god damn well.

Peele’s direction this time around proves that the man is in no way a one hit wonder. The director has a knack for leaving clues on what the movie is trying to say and cool horror Easter eggs that warrants repeat viewing. Where Get Out played the cards out for the audience, Usis more of a thinking person’s film. One key example of this is my choice for this film’s MVS(Most Valuable Scene). Stating the obvious, there is a final confrontation between Adelaide and her doppelganger, Red. Instead of making it a typical brawl between the two, Peele uses a series of cuts between the characters’ past where the duality of them was almost in perfect sync. He takes the trailer’s haunting version of I Got Five on It, by Luniz, and plays it in the background as one side is slowly becoming the winner. What happens next—and what makes it so fucking amazing—is the downward fall of one of the character’s mental state and how the roles are beginning to switch. Their slow turn into the thing that they are fighting against, becoming cruder and more savage, is done through a perfectly calculated dance number that’s context can be explored in so many ways.

I’m sure you’ve heard several theories on what the film could be about you may have your own interpretation of what the film is trying to say. Without spoiling the movie, here is what I think the meaning of Jordan Peele’s US is.

The film is about social status and how privileged life is making “US” look down on the less fortunate. The film isn’t about race like some would think. What Peele is trying to say is that there is a disconnect between people who have a successful life and those that have been given the raw end of the deal. The outfits the Tethered wear are to show how higher society views the lowerclass as all the same and lacking identity and self-worth. The Tethered aren’t even given a voice because some people choose not to hear their calls for help. While there’s some evidence of this during the film, the developing plot also conveys the message that people who look down on others are really looking down on themselves. The title being Usand the many displays of duality—like 11:11 and some sweet shots of similar characters looking at or through the same mirror—tell us, the audience, to re-examine ourselves and never forget where we come from. That is just my opinion.

Us is another film in Jordan Peele’s bright future as a writer and director. It’s been rumored that the man has been fine-tuning his scripts for some time and his next features are sure to bring more critical thoughts with every new release. Though Usis not as perfect as Get Out, the film is in no way a misstep in Peele’s career. I can’t wait to see what he does with the Twilight Zone and many more projects he’s working on behind the scenes. Go see Us, holding hands like a creepy 80s campaign attempt to unite the world, and see what everyone is talking about.

Continue Reading
You may also like...
Related Topics:Jordan Peele, US