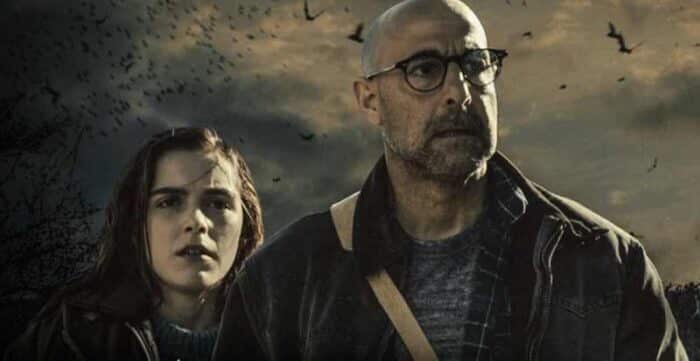 Netflix has had several noteworthy films since dipping their toes in original content, but none of have quiet captured mainstream attention like Bird Box. Even though the film scored modest reviews from critics, it became somewhat of an internet sensation with audiences, even inspiring its own meme entitled “The Bird Box Challenge”. Netflix latest horror film The Silence looks to take that concept, which was also popularised by A Quiet Place, in a different direction. The result is a cheaply made Sci-fy channel film that holds some shameless entertainment value.

The Silence follows Ally (Kieran Shipka), a teenager who is lost for hearing but trying to live a normal life. Suddenly, the world is invaded by mysterious creatures called Vesps, who attack anything that makes a noise. Ally and her family must do whatever it takes to survive and make it to a safe haven.

Many will simply label The Silence as a cheap ripoff trying to cash in on Bird Box and A Quiet Place’s success. Technically though, the story here was actually conceived before both of those films were released, but the film’s generally uninspired execution leaves it feeling like a shallow ripoff.

I would aptly describe The Silence as “The Asylum” version of this new quiet genre of horror films, as the execution scrapes the bottom of the barrel as far as execution goes. Director John Leonetti’s camera work is stale, with the greenish hues invading the lens for “style” leaving an often offputting impression. Perhaps where the film’s budget is most exposed is with the CGI, as the Vesps creatures look akin to last-gen video game characters, wasting every opportunity to unsettle the audience. Any visual style choice is handled sloppily, making effects like lightning strobes and shaky cam feel amateur.

The script only adds to the film’s Sci-Fi Channel execution, with Carey Van Dyke and Shane Van Dyke developing a rudimentary treatment of this concept. The family dynamic is lifeless, leaving skilled actors like Stanley Tucci and Miranda Otto stuck running through the motions. There are some interesting ideas amidst this apocalyptic horror story, including a creepy tongue-cut religious group, but these concepts never rise above mere cliches.

The Silence’s lone saving grace is the guilty pleasure enjoyment that can come from watching Sci-fi Channel films like this. Whether it’s the goofy effects, cliched plot beats, or cheesy speeches, there is some fun to be had with The Silence, even if much of it ends up being at the movie’s expense.

Continue Reading
You may also like...
Related Topics:Netflix, The Silence