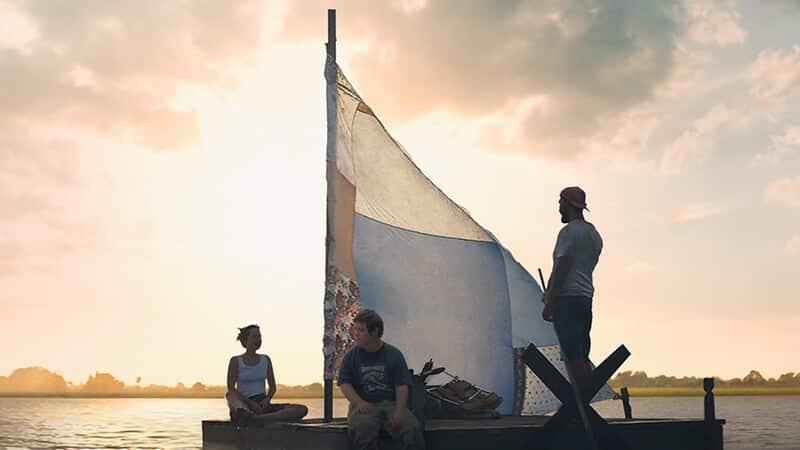 Many look at the career of Shia LaBeouf as a tumultuous journey for the former child star, with that narrative grossly overshadowing his star ability as an actor. Whether he’s a free-loving drifter like in American Honey or bringing to life the wildman energy of John McEnroe in Borg vs McEnroe, the actor has demonstrated remarkable versatility and commitment with every performance. His latest venture The Peanut Butter Falcon, a well-regarded comedy from the Sundance Film Festival, continues to display his ability, making for a satisfying road trip film with a big heart.

The Peanut Butter Falcon follows Zak (Zack Gottsagen), a young adult living with Down Syndrome. Tired of the doldrums of living in a retirement home, he breaks out to chase his dream of going to professional wrestling school. He soon enlists the help of Tyler (Shia LaBeouf), a down-on-his-luck fisherman who agrees to journey alongside Zak.

Operating as a modern-day homage to the adventurous spirit of Huckleberry Finn, The Peanut Butter Falcon at its core is a sweet-natured coming of age film that doesn’t succumb to the overbearing schmaltz that many festival films suffer from.

The ever-beating pulse of this film is its respective stars. Zack Gottsagen is a delight in his big-screen debut, drawing from his own personal journey to become an actor to give authenticity to his character. His bright demeanor and nonstop pursuit of his dreams is an infectious force that constantly draws the audience to him. Then there’s Shia LaBeouf, who achieves some of his finest work as Tyler. The actor’s conviction sells this movie even when the material fails to do so, wearing his heart on his sleeve as he provides a constantly encouraging voice for Zak.

Zak and Tyler’s dynamic is the true heart and soul of the film, with both actors rifting off each other with ease and too often humorous effect. Within each other, both characters find the support and positivity they have longed for in their lives, with that push-and-pull dynamic being a joy to watch. It would be easy for this material to drift into saccharine territory, but the genuineness of both actors keep the movie on course. Supporting players Dakotah Johnson, Thomas Hayden Church, and Bruce Dern offer steady performances in their brief roles.

First-time writer-directors Michael Schwartz and Tyler Nilson show promise with their debut. The screenplay, despite its familiar set-up, finds its unique voice through its Huck Finn inspirations, with the duo crafting a coming of age tale that fixtures on the free-spirited nature of Zak and Tyler. Both Schwartz and Nilson prove adept at handling the characters’ respective journeys, never overplaying their hand with overbearing music or speechified dialogue.

Still, The Peanut Butter Falcon suffers from common first film falterings. The film finds itself adding unnecessary conflict through a subplot involving John Hawkes pursuit of Tyler, with the filmmakers handling of these scenes ringing more as over-the-top melodrama than genuine tension. It all builds to an ending that fails to do justice to its characters, cleanly wrapping everything up in a neat bow that takes away from the mostly grounded nature of the narrative.

Issues aside, The Peanut Butter Falcon is an infectiously joyful experience that will leave audiences with a smile on their face.

‘Angel Has Fallen’ Review: Another Middling Entry in a Mediocre Franchise
‘The Fanatic’ Review: John Travolta Stars in Tone-Deaf Portrait of Fandom
Advertisement
Advertisement
To Top