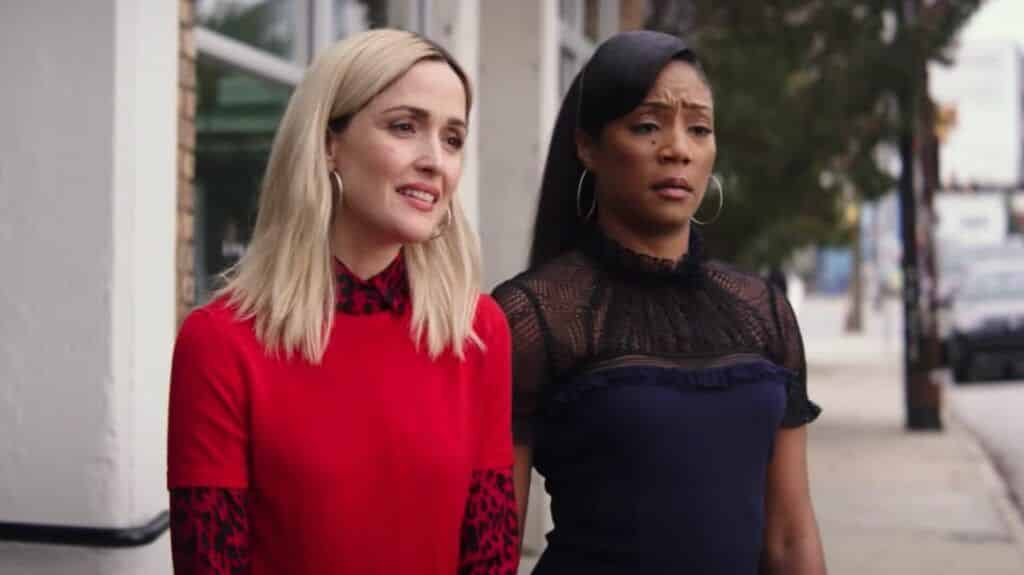 Comedic stars Tiffany Haddish and Rose Byrne have been successful staples in comedy the past few years. After Haddish broke out with the laugh riot Girls Trip and Byrne shined as a hilarious co-star in Neighbors, the duo has continued to gain momentum while playing to the strengths of their persona. Now teaming up in the latest raunchy comedy Like a Boss, the two develop a natural rapport that is sadly sandwiched into generic studio formula.

Like a Boss follows Mel (Byrne) and Mia (Haddish), best friends since grade school who are in a failing make-up business. After getting their business revived by make-up mogul Claire Luna (Salma Hayek), their friendship is put to the test as Luna tries to overtake their business.

Clocking in a slim 83 minutes, Like a Boss is self-aware in its lack of story or substance, rather trying to provide laugh-a-minute comedy with a variety of improvisational bits and skits. Some of these moments work genuinely well, particularly due to the strengths of Byrne and Haddish.

The duo makes for great comedic foils, with Haddish’s bold confidence grabbing the screen while Byrne plays off her with offbeat nerdy charm. Their ability to imbue each gag with energy and conviction can often mask middling material, and their rapport does develop into an effectively genuine pair of sister-like friends. Co-stars Billy Porter and Jennifer Coolidge also shine as two of Mia and Mel’s workers, with Porter’s personable performance especially taking the spotlight.

After a promising start, Like a Boss quickly descends into studio comedy formula. Writers Sam Pitman and Adam Cole-Kelly’s thinly conceived plotline does little to invest audiences, taking contrived detours into cliches in order to give forced conflict. It’s a bummer that after 20 minutes of seeing Mia and Mel as best friends, the film is constantly forcing bizarre plot beats to break the sharp pair up. There are vague attempts at connecting the narrative to a pro-feminist message, but director Miguel Arteta has nothing new to say about the conversation other than offering disingenuous rah-rah support.

These issues would be more forgivable if its laugh-a-minute approach worked, but the jokes miss more than they hit. Salema Hayek has been wildly entertaining as a cartoonish villain in the past, but she’s given little in terms of meaty material as a shrill mean-spirited boss. Much of the gags are vulgar attempts to shock audiences, with little in terms of creativity being displayed as the stars are forced to go through the motions. Haddish and Byrne can charm with ease, but Like a Boss’ competent, yet uninspired execution never proves to be up to their talented pedigree.

Continue Reading
You may also like...
Related Topics:Like a Boss, Tiffany Haddish