Every Time Michael Myers Was Unmasked In The ‘Halloween’ Franchise

Now that the Halloween franchise is back on the big screen where it belongs, with the new sequel Halloween Kills coming later this year – it’s a great time to look back at some of the highlights from the iconic and beloved slasher film franchise. Now while the series’ trademark villain Michael Myers usually hides his face underneath a creepy array of haunting masks, there are several instances where he tends to go unmasked for short periods of time. We’ll be taking a look at these different versions of Michael Myers unmasked, and honestly, they usually don’t make him any less terrifying. Of course, for this article, we’ll only be focusing on the times Michael was seen unmasked as an adult.

The first major unmasking in the original Halloween franchise occurs near the end of the first film, where Laurie Strode manages to pull the mask off Michael during a struggle. As Michael puts it back on, Dr. Loomis interrupts him with a series of gunshot blasts that knock Michael over the balcony of the house. At this time the unmasked Michael Myers was played by Tony Moran.

We wouldn’t get to see Michael’s face again until all the way when Halloween 5: The Revenge of Michael Myers was released. Once again towards the end of the film, Michael Myers removes his mask when he’s about to kill his niece Jamie and she begs to see his face. Actor Don Shanks is shrouded mostly in darkness here, adding for a creepy scene with emphasis on Michael’s eye as he cries. It’s an eerie moment and one that adds a layer of emotion that isn’t felt in most other entries of the franchise.

The next time Michael Myers would be unmasked wouldn’t be in the original continuity, but rather Rob Zombie’s remake double feature of Halloween and Halloween II. In both films as an adult, Michael was portrayed by Tyler Mane. As an added bonus, in the unrated director’s cut of Halloween II, Michael Myers actually speaks while he’s unmasked and yells the word “DIE!”

After that strange interpretation of the character, things went back to their roots in the 2018 Halloween sequel. Michael Myers no longer has an inclination to speak, and most times when he’s unmasked things are kept out of focus or out of frame. It’s a beautifully creepy way of assuring the audience that this really is the Michael Myers we remember from the original 1978 film, and even by seeing him unmasked again all three decades later, he’s still just as deadly.

This sequel to the 2018 Halloween film shows more of Michael Myers unmasked. And, not unlike its predecessor, most of the shots are quick glimpses, out of focus, or in the shadows. But there is one particularly good side profile of the horrifying killer. 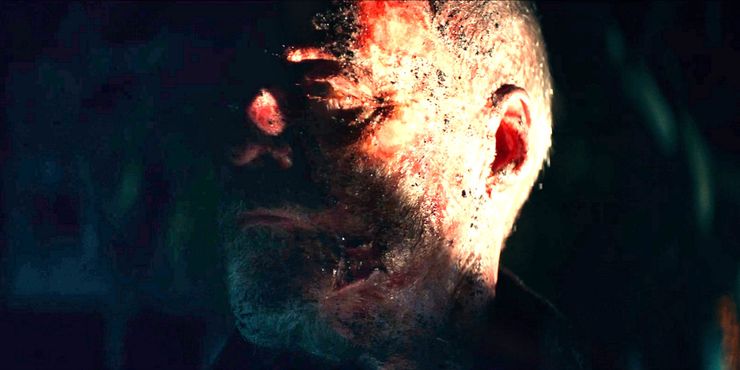