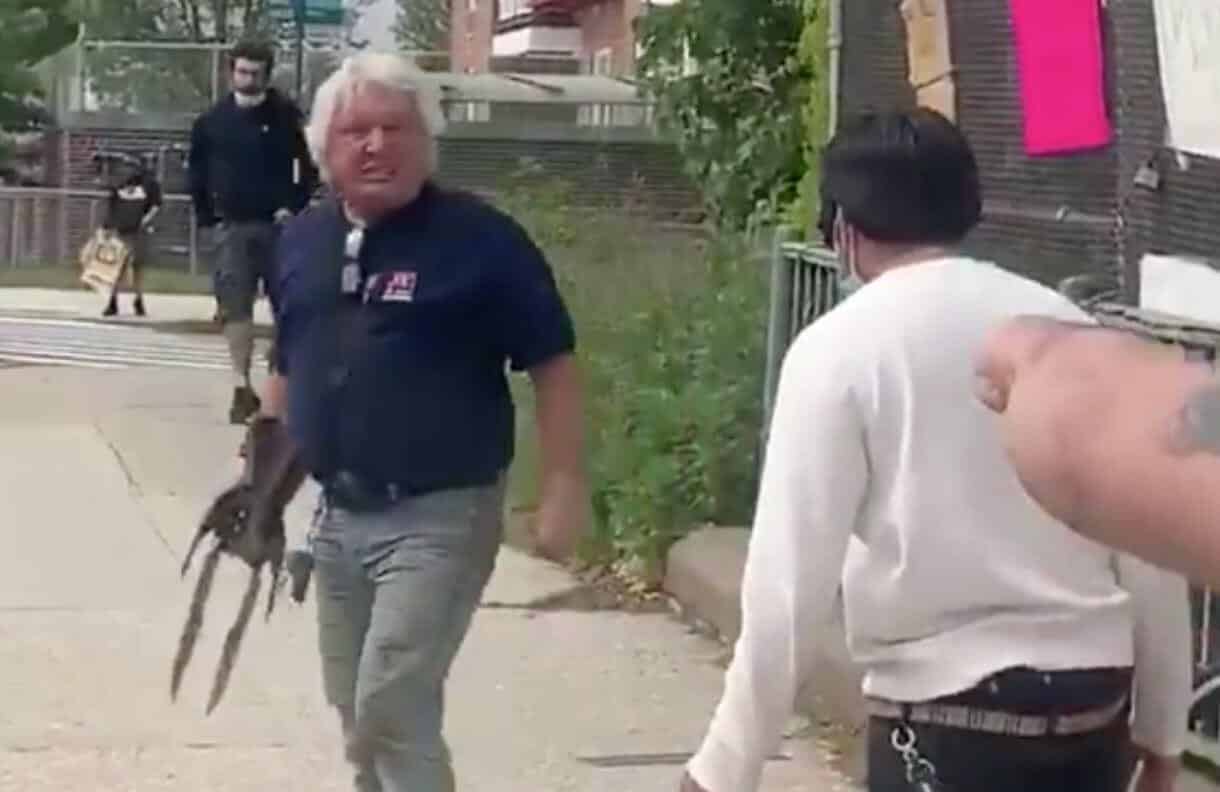 The year 2020 continues to be filled with surprises, many of which have abruptly came about throughout the protests and riots that occurred after the death of George Floyd. In that tradition, it seems another wild occurrence has been sighted at one of the protests – apparently one older man was so angered by protesters (who were said to be throwing things at his car) that he charged at them with knives attached to his hand as if they were Wolverine claws. The man then continued to plow his SUV into the sidewalk where they were standing in Whitestone, Queens.

The incident occurred Tuesday afternoon around 3:45 PM, near Clintonville Street and the Cross Island Expressway service road. It was captured in two videos. The first of which shows the man brandishing his Wolverine claws while chasing after protesters, while the other video of the man shows him getting back into his SUV. He continues to make a U-turn with his vehicle and then charges it into the sidewalk where at least a half dozen protesters were standing. They can be seen fleeing the area, after which the man reversed his vehicle and drives off.

So this is how anti-protestors are handling this situation… THIS MAN HAD 4 KNIFES TIED UP ON HIS ARM AND WAS TRYING TO STAB THIS KIDS, AND THEN HE GOT UP ON HIS CAR AND GOT ON THE SIDEWALK AND TRIED TO RUN OVER THIS PEOPLE, PEOPLE WHO ARE LESS THAN 21 YEARS OLD! PEOPLE ARE LITERALLY CRAZY, THEY DON’T EVEN THINK TWICE ON TAKING SOMEBODY’S LIFE AND END IT JUST LIKE THAT!!!! I’M SICK AND TIRED OF THIS! PEOPLE ARE PROTESTING FOR WHAT’S RIGHT, FOR JUSTICE! THEY’RE NOT DOING NOTHING WRONG!!! #justiceforgeorgefloyd #blacklivesmatter #racism #murderattempt

The NYPD gave The Post the following emailed statement:

“A 23-year-old male reported to police that and [sic] unidentified individual exited a vehicle with a sharp object and displayed it to a crowd that was peacefully protesting and fled in a vehicle described as a gray SUV mercury.”

Thankfully, it seems like no one was hurt during the incident. After all, there were a lot of possible injuries or even fatalities that could’ve occurred either by the Wolverine claws or the SUV. Luckily everyone seems to be unscathed – and no arrests have been made as of this writing.

“There were no reported injuries as a result, no arrests at this time and the investigation is ongoing,” the statement concluded.

Hopefully people will continue to be safe and these protests can continue peacefully from all sides.