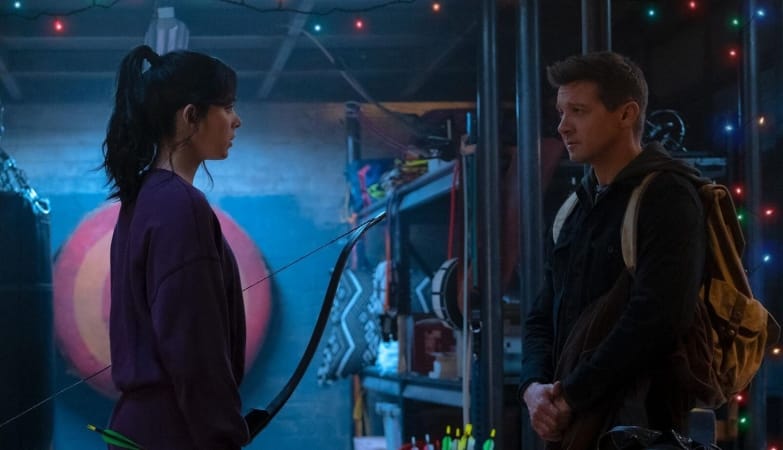 Marvel has just revealed the first look and release date for one of their most highly anticipated Marvel Cinematic Universe shows – Hawkeye! The new series will revolve around Jeremy Renner’s Clint Barton aka the titular Hawkeye, and as shown in the first look, we get to see him meet with Kate Bishop played by Hailee Steinfeld. While it doesn’t reveal much, it is an exciting first glance – and it does tease the Christmas setting that the series is going for as well. Which, luckily, makes the release date that much more appropriate – considering it’s been revealed to be this November.

Here’s the first look which shows Clint Barton and Hawkeye standing by some rather beautiful Christmas lights:

Jeremy Renner had this to say about Hailee Steinfield’s character Kate Bishop while speaking with EW about the first look at Hawkeye:

“[Kate is] a 22-year-old kid and she’s a big Hawkeye fan,” Renner began. “She has a wonderfully annoying and equally charming manner about her, because she’s such a fangirl of Hawkeye. The relationship grows from that, but the biggest problem for Clint is Kate Bishop and the onslaught of problems that she brings into his life.”

He also stated how he mentored the actress behind the character as well.

“That was always my role. Outside of acting in the thing, I was protecting her and giving her the CliffsNotes on how it goes with this kind of filmmaking: Green screen, superhero life, all that stuff,” Renner says. “I just wanted to protect her, because there’s a lot of physical stuff. She’s a wonderful actress, a wonderful human, and I can’t wait to see all the cool stuff that she’s able to do.”

The current release date for the premiere of the Marvel Cinematic Universe series Hawkeye will be November 24 on Disney Plus.