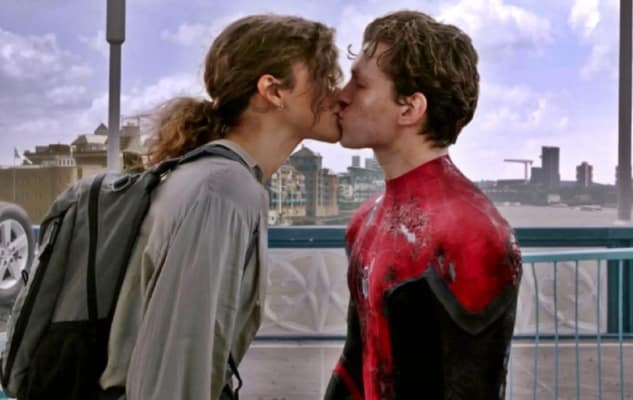 Marvel and Sony have kept and incredibly tight lip on any real details when it comes to the upcoming third Spidey solo flick, Spider-Man: No Way Home. It is arguably the most anticipated film for both Marvel and Sony right now, yet all we really know is from some toy leaks (which aren’t always accurate) and from a mass of rumors (mostly from some not so trustworthy sources). Now, one of the juiciest details coming out from this film might have nothing to do with the plot of all!

It would seem that co-stars and long time friends, Tom Holland and Zendaya might just be crossing the threshold from friendship to relationship.

The stories on this all started back in July when the two were spotted giving each other what seemed like a secret kiss in a car. Ever since the first Spidey film, these two have been shipped by fans worldwide. Now, it looks like that internet fervor could have been rooted in some truth. Holland and Zendaya were spotted outside of the latter’s mother’s house when the seemingly intimate moment was captured by cameras. The pair have always had fun with these rumors and their fans, playing up their friendship and more in press junkets and outings. This moment, though, was looked at to be spontaneous and romantic. And the two have never shied away from being outspoken about how lose they are as friends.

To be honest, while the pic is very telling, it confirms nothing. Besides this snapshot, all other confirmations are conjecture at best, taking statements out of context or reading so deeply between the lines that they miss the point entirely. At the end of the day, if they are both happy with whatever level their relationship is at, good on them. We as fans should be happy for them no matter what and respect the privacy they so obviously desire. IF this is true, good luck to them both and here’s to a long and happy relationship!

Are you fans of the Holland/Zendaya duo? Let us know in the comments below!