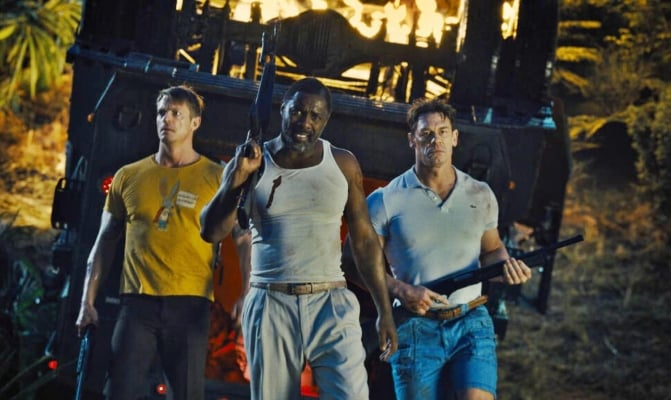 If you haven’t watched James Gunn’s The Suicide Squad yet, you’re really doing yourself a disservice. The writer/director really gave us the movie that fans wanted the first time WB attempted this franchise in 2016. He also didn’t have the leash of a PG-13 rating like he did with Guardians of the Galaxy, as great as that movie is. This time around, the reigns are off and Gunn is running full steam ahead with these villains forced into doing ‘good deeds’ or else – but Gunn isn’t without his nods to the fans. This particular nod is also to the sequel to the movie that made the director a household name.

*SPOILERS AHEAD FOR THE SUICIDE SQUAD*

During the scene were Task Force X is waiting for The Thinker in his favorite night time spot of the strip club in Corto Maltese, we see a group of women dancing on one of the stages. The woman in the front, standing out from the rest in a scarlet outfit and red hair is none other than Mantis herself, Pom Klementieff!

Gunn brought his good friend over from the Marvel Cinematic Universe to make the brief cameo as not only a way to incorporate his friend into the film, but as a sly nod to his work on Guardians of the Galaxy. It’s also a great Easter Egg for the fans! Even myself, as I watched the film for the first time, was taken aback by her inclusion. It took me a moment to realize who it was, but once I did, I smiled ear to ear.

Gunn is a fan first, just like all of us, so he made sure to put Easter Eggs in this movie for all of us. This nod also plays into his desire to see Marvel and DC work together someday. Mantis in The Suicide Squad, who would have thought?

Did you catch Pom Klementieff’s cameo in The Suicide Squad? Let us know in the comments below!