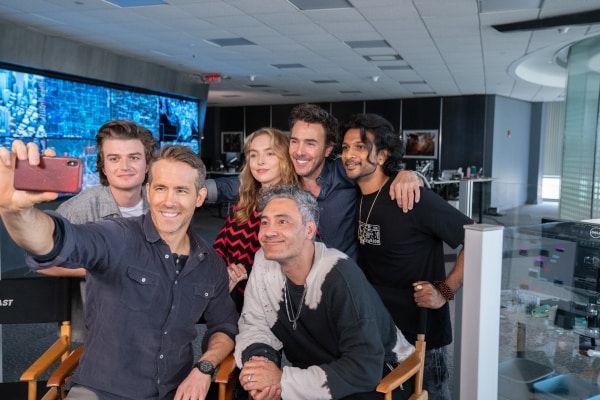 Ryan Reynolds is typically known for his wisecracks humorous charm on and off the screen. So, it comes as no surprise that Free Guy would be the type of movie the actor would star in. Directed by one of the minds behind Stranger Things, Shawn Levy, Reynolds’s character finds himself in a video game where pretty much anything is possible.

The idea of a video game movie might send chills down the spine of anyone with a passing knowledge of the genre. There’s usually a multitude of reasons why a video game movie should not work but Free Guy tries to stand from the rest by not being beholding to any well-known gaming IPs.

To help sway the audience to check out the movie, Reynolds, Levy, and fellow director/actor Taika Waititi delved into why they set their sights on bringing the movie to the big screen and a few other things to note.

“So, for this, it’s just slightly new for me.  I like that Guy is—there’s a movie that I love called Being There starring Peter Sellers,” when Reynolds asked about getting a better grasp on his role. “And that was the first kind of foothold I had into this character and this world.  And there’s something really wonderful about playing a character who’s kind of naive and innocent, and I mean, it’s even said in the movie, he’s, in a sense, he’s kind of like a four-year-old adult.”

Waititi is normally known for playing very offbeat or outlandish side characters. His role as Antoine, the antagonist of the movie, is a change-up but not too far from his style of comedy. The actor/director revealed that Levy has a level of “faith in people’s abilities and just trusting [them]” to get the right interpretation of the characters for Free Guy.

When asked what Waititi’s inspiration for the character was, he answered, “I was like, basically, the characters I work on are just based on people I’ve met.  So, I’ve met a lot of people like this in America.”

Free Guy looks and feels like it has the potential to be a new franchise that’s riped for sequels—the prospects are endless. Levy let it be known that a sequel for Free Guy could be a possibility but didn’t shy away from a realistic view of that notion.

The director shared, “Yeah, I guess the short answer is yes.  But I’ve made things that launched franchises and I’ve made enough things to know that you just don’t know the outcome. So yeah, we have bandied about and flirted with some ideas.”

Levy continues, “Like, it’s so rare that a studio lets you make a big-budget new movie.  And so, to have the Antoine character played by Taika literally talk about the value of sequels and have this cynical attitude towards the new.”

Free Guy is in theaters on August 13th.