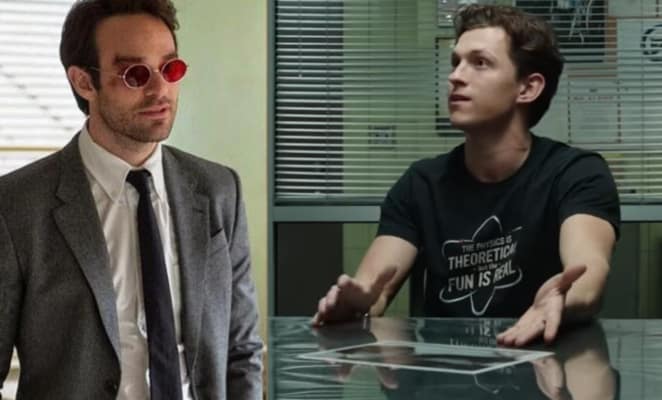 Spider-Man: No Way Home saw its first trailer released yesterday after fans had been buzzing about it for quite some time. This is nothing new, as Marvel Studios has shown that they will release trailers for their MCU movies whenever they see fit – regardless of whether or not fans get fed up with waiting. The trailer revealed quite a bit – but something may have gone unnoticed. Charlie Cox’s Daredevil/Matt Murdock.

For those of you unaware, there have been rumors that suggest Charlie Cox will be making a return as Murdock in Spider-Man: No Way Home – following cancellation of the Daredevil series at Netflix. Obviously, that hasn’t been confirmed, but some fans believe they may have spotted a moment in the trailer where the actor can be seen talking to Tom Holland’s Peter Parker.

Whether or not it is Charlie Cox remains to be seen. It would, however, be the perfect film to bring the character in, as it could retcon the Netflix version of the character and make this one a rebooted version for the multiverse. Then again, they may just go the route of just having him appear and letting fans connect the dots later. This, of course, is all speculation, as we don’t even know if he’s even in the movie yet. It would be a pretty cool thing for fans, though, as the show was very well regarded.

As far as Spider-Man: No Way Home is concerned, it will be nothing but rumors, speculation and theories until the film is released on December 17th – which will undoubtedly be fun to read. Until then, we’ll be sure to keep you posted on everything Spider-Man and MCU related as we get it.