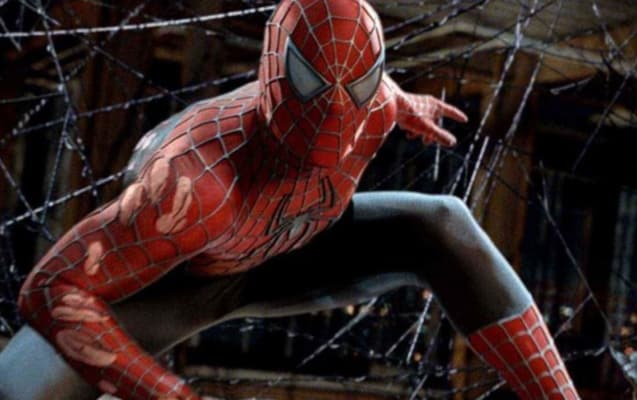 Fans are still waiting for confirmation that Andrew Garfield and Tobey Maguire are in the upcoming Spider-Man: No Way Home film. At this point, just about everything else has been confirmed – from Alfred Molina returning as Doc Ock to Willem Dafoe as the Green Goblin. Yet, there still isn’t any official sign of Andrew Garfield or Tobey Maguire. A new leak, however, might’ve just pushed things further into the open. As it turns out, a picture of an apparent “Variant Spider-Man” toy from Hasbro has leaked on the internet. What’s more, this “Variant Spider-Man” is clearly wearing the iconic Spider-Man suit once worn by actor Tobey Maguire in Sam Raimi’s Spider-Man trilogy – but is it real?

As stated in the caption for the toy which was shared via Twitter (the picture has now been deleted):

One post suggested the leak was fake based on an apparent email exchange with Hasbro:

Ok so this SPIDERMAN NO WAY HOME toy featuring Tobey Maguire SPIDER-MAN action figure turns out out to be FAKE confirmed by HASBRO!!!!!
OR THEY ARE LYING just because it has been LEAKED!!
YOUR THOUGHTS?
CRED- spider.fan1962 @SpiderMan3news @spidermanworrld @SpidermanWay pic.twitter.com/KDmyLZojcI

There’s definitely a lot of conflicting information going around the internet about the film, so it’s hard to tell what is legit and isn’t legit at times. However, Tobey Maguire in the film certainly seems like a no-brainer at this point. There have been a wide variety of leaks, rumors, and other pieces of information which have all suggested the involvement of Andrew Garfield and Tobey Maguire. And when considering the involvement of their respective counterpart villains like Electro and Doc Ock – it’s hard to imagine that Garfield and Maguire wouldn’t be returning as well. Of course, we’ll just have to wait for an official confirmation or look at the characters in the upcoming film.

Here’s the plot of the new film…

“For the first time in the cinematic history of Spider-Man, our friendly neighborhood hero is unmasked and no longer able to separate his normal life from the high-stakes of being a Super Hero. When he asks for help from Doctor Strange the stakes become even more dangerous, forcing him to discover what it truly means to be Spider-Man.”