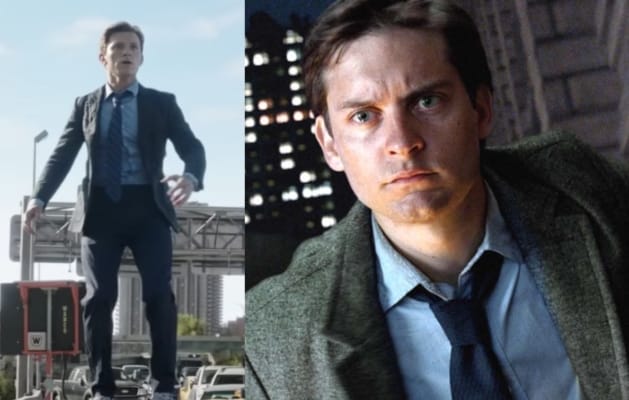 Spider-Man: No Way Home was already the most anticipated movie of the year, and after the long-awaited trailer finally dropped to record viewings, it is even more wanted by fans! Everyone has been dissecting the trailer, looking for clues as to what all we can expect and what rumors may be true or not. With it seemingly becoming more of a reality that we are getting a live action Spider-verse kind of film, fans want confirmation that Tobey Maguire and Andrew Garfield will indeed appear in the movie as their respective versions of the Wall Crawler. Now, some eagle-eyed fans may have found something that points to Maguire.

Shared on Twitter, a points out that during the scene on the bridge with the returning Alfred Molina as Doctor Octopus, Tom Holland is seen in a suit before his Iron Spider nanotech suit envelopes it. That suit actually has significance, as it is seemingly the same suit that Tobey wore in Spider-Man 3.

Tom Holland is wearing the same drip Tobey was wearing

Imagine Marvel jebaits us and Peter is just replacing Tobey & Andrew’s Spider-Man in their timeline but the villains only recognize him as Peter with no difference? Balls. pic.twitter.com/HUE9p1ttv4

So, the idea is that Marvel is faking us out and replacing Maguire’s head with Holland’s for the trailer. He also thinks that, worse case scenario, that Tom Holland’s Spidey jumps into Maguire’s and Garfield’s universes and ends up replacing them, affecting eliminating the need for the previous actors. This is why the villains recognize Holland as their Peter Parker, because he replaced them.

There was also this catch by another fan, who also seems to think Marvel is trying to throw us off:

Also, the Vans are a little sus to me. Every other scene in the trailer show Tom in Nike’s.

Does anyone recall if Toms Peter has ever had Vans in the other movies?

The only slight discrepancy with the Vans is that Tobey wasn’t wearing them in the fight with GG in SM3. 2/3 pic.twitter.com/jfFq2KSs82

This is a fascinating theory and a cool little Easter Egg, except not everything on the suit is the same. As you can see below, one fan pointed out that the tie is different:

Tom Holland and Tobey Maguire are wearing the same suits in both Spider-Man 3 and Spider-Man: No Way Home. It might just be a coincidence because to ties are different pic.twitter.com/t3JSPj4sSs

Also, Tobey Maguire’s version wouldn’t have the nanotech Spider-Man suit that comes on over said suit. However, if Maguire and/or Garfield had decided not to return for whatever reason, this theory gives Sony and Marvel an out that would eliminate the need for either or both actors.

Here’s another look at the suits:

@ryanarey So it may not be on purpose! but i realised that Tom’s peter is wearing the same suit the Tobey’s Peter wore in spider-man 3,

And the fact it was a scene which showed that peter’s life is going perfectly but harry’s isn’t that could be a same type of scene in FFH pic.twitter.com/Xns4nflIUo

okok so i feel like tom is gonna visit other universes movies w be the spiderman from that universe, like he’s gonna be the tobey Maguire spiderman and andrew Garfield, still hope they make a cameo at the very least, THE SUITS ARE IDENTICAL pic.twitter.com/mFzbI36F70

Like we said though, this could all just be a trick by Marvel Studios to keep fans guessing – like they did with Avengers: Infinity War and Avengers: Endgame. We’ll just have to wait and see for sure when Spider-Man: No Way Home hits theaters on December 17th.