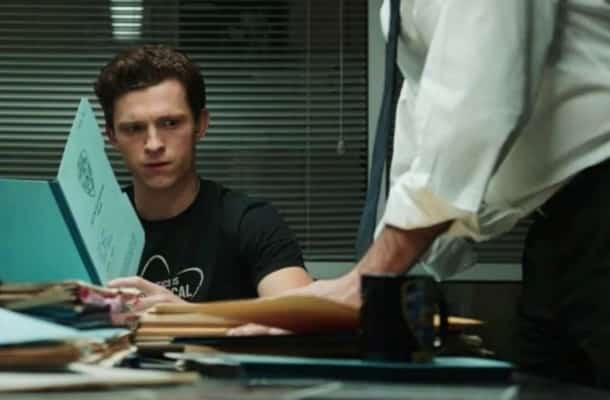 One of the longest-running rumors about Spider-Man: No Way Home is that Daredevil actor Charlie Cox will be involved with the film’s plot. In particular, it’s been suggested that the actor’s character Matt Murdock could be defending Peter Parker in the film. As the case with other rumors circulating around the film, however, Charlie Cox has refused his involvement. But now fans are wondering if a shot in the film’s trailer could have given away Charlie Cox, or more specifically, his forearms.

In particular, there’s a moment where Peter Parker is being questioned by police. During this moment in the trailer, some fans suspected that some visible forearms actually belonged to Charlie Cox and thus confirmed his involvement in the film as Matt Murdock. Unfortunately for Daredevil fans, however, Charlie Cox is once again denying these suggestions. As he stated while speaking with ComicBook:

“I can promise you those are not my forearms,” Cox stated.

And now, a new trailer that’s showing ahead of Shang-Chi in theaters has made its way online – and can confirm that in the trailer – it’s not Charlie Cox.

Saw #Shangchi in imax and they played the #SpiderManNoWayHome trailer before and because of the increased aspect ratio I was able to see the face behind the arms and can confirm it is NOT Charlie Cox #Daredevil pic.twitter.com/5l9r8aOQQ0

Many details about the upcoming film have been kept under wraps, so no doubt some fans are still going to believe that Charlie Cox could be involved. But until the final film is released, we probably just won’t know for sure. But other rumors have turned out to be true – and these rumors included the arrival of Doc Ock from Spider-Man 2 and the Green Goblin from the first Spider-Man, both of which were teased in the film’s trailer. So who knows what Spider-Man: No Way Home will unleash into the MCU?