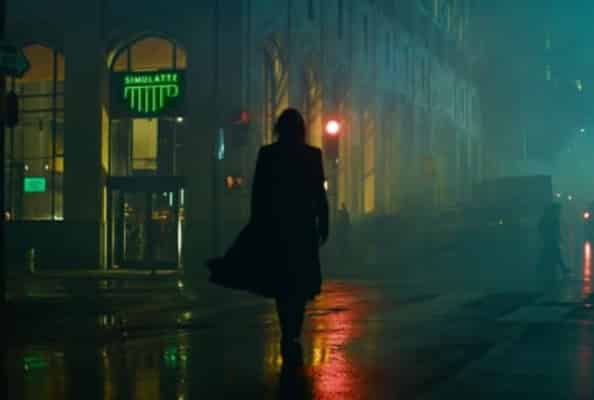 Blue’s Clues Steve entered back in our lives and so has The Matrix. What year is this again? All jokes aside, the long-awaited trailer for The Matrix Resurrections finally premiered online. Fans of the franchise are more than likely flipping out right now—especially the one currently writing this article. There is so much to unpack from this two-minute and fifty-eight-seconds trailer that introduces and reintroduces us to this world.

Here’s the part where I try my best to break down what the hell is going on – and throw out a few theories that might play out in the movie.

The trailer starts with an establishing shot of a city. From the jump, the scene gives a hint of it being fake or manifested which leans heavily into the idea that what we’re seeing is not real. Harris presents himself as a therapist to Reeves’s Neo whose going by his digital-given name, Thomas. One thing to note on Harris’s appearance is that he’s wearing blue-rimmed glasses.

The Wachowskis have let it be known that the meaning of certain colors is important in their Matrix films. “Red” means to go further down the rabbit hole, “green” lets the audience know that they’re in the Matrix, and “blue” signal a form of control in that world. Harris gives us a sign that his character might be a part of the Matrix and his job is to keep Thomas in this world.

It appears that Thomas has been having dreams that may have become a reality in the past or the future. One, in particular, is a shot of Neo’s body laid out surrounded by machines. 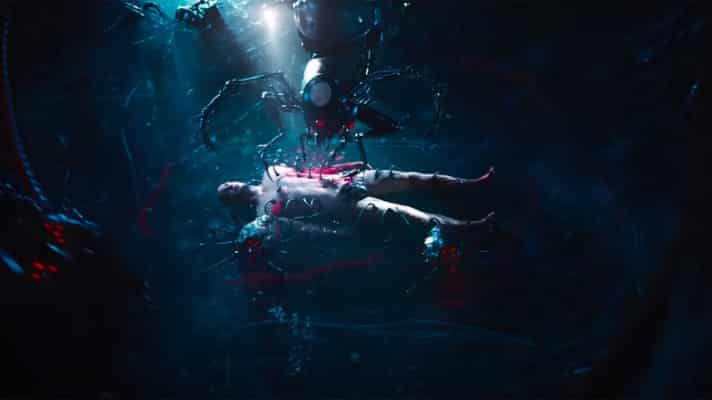 A part of Neo’s destiny was to reinsert the anomaly code within him back into the Matrix. We might get a glimpse of that in The Matrix Resurrections.

From there, Thomas asks the question, “Am I crazy.” After Harris’s character says, “We don’t use that word in here,” then ‘Go Ask Alice’ by Jefferson Airplane kicks up—down the rabbit hole we go.

Thomas and Trinity are reintroduced to one another for the second time but hold no memory of their past. Trinity will once again have a role to play in this story, but I think that the scope of that role hasn’t fully been revealed. I do have a theory but more on that later.

From there The Matrix Resurrections presents several shots of Thomas’s everyday life. He’s taking prescribed blue medication pills that might be the reason he doesn’t remember who he truly is. However, it seems like the power he holds is greater than that of those drugs. I like to point out that we never got a full explanation of what was to happen if one were to take the blue pill. I think exploring this idea in The Matrix Resurrections is a very interesting choice to take.

Another shot that caught my attention is of Thomas in a crowded elevator with people glued to their phones or tablets. This could be a commentary from writers Lana Wachowski, David Mitchell, and Alekasnader on how our society is so dependent on these devices.

The next few shots show that something has changed for Thomas, and he no longer is taking his medication. The next cut follows the words “go ask Alice” where we get a clear shot of a copy of Alice in Wonderland.

The Matrix films have been heavily inspired, but this story and the next scene show us Jonas’s character who’s wearing red-rimmed glasses. She might have something to do with Thomas becoming Neo again but this character could also possibly be a grown-up version of Sati, from The Matrix Revolutions. 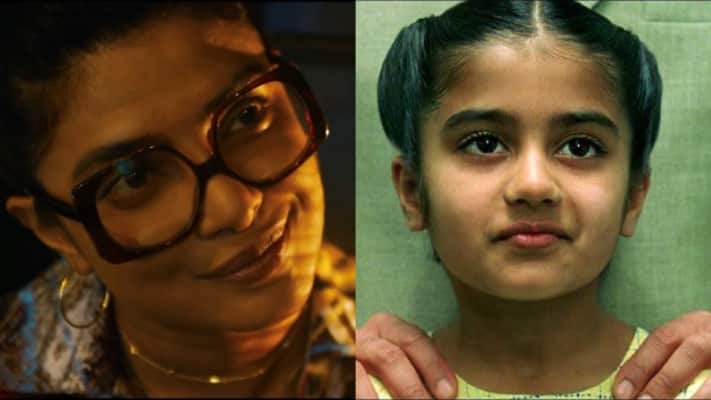 Thomas finds himself in a nightclub that looks similar to the one where Neo meets Trinity for the first time in The Matrix. This is where we finally meet Mateen’s character that shares a striking resemblance to Laurence Fishburne’s Morpheus. I mean, c’mon. He’s handing Thomas a red pill and utters the words, “Time to fly.” Does the ending of The Matrix ring a bell?

The next scene that happens is a closeup of a tattooed white rabbit that could belong to Henwick’s. She tells Thomas to follow her and opens a door to a blinding light. Something that Neo faced in the third act of The Matrix Reloaded and revealed the Chosen One’s destiny. The Matrix Resurrections might be televising another way of Thomas following the same trajectory Alice in Alice in Wonderland faced.

One thing to notice is the use of mirrors. The Matrix showcased how a mirror can be used to uncover the real world and in The Matrix Resurrections, Thomas and Henwick’s character exit from a mirror to re-expose our hero to the truth of his surroundings.

Thomas later finds himself in a dojo with Mateen II’s character which is a callback back to the very excellent training session between Neo and Morpheus. This continues the theme of familiar grounds. 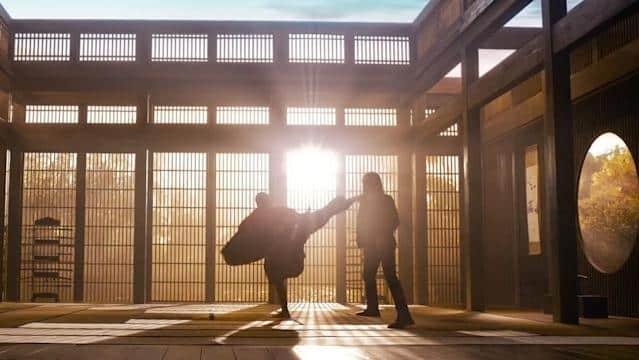 The trailer kicks into high gear showing off some impressive establishing shots of the human farms the machines use and a ship exploring what looks to be the remains of a city. It’s debated whether this could be Zion or that life on the topside is still uninhabitable. From there, the action set pieces start to show up.

Henwick’s character is chased by authorities that remind me of the introduction of Trinity in The Matrix. We finally get a shot of an Agent ready to join the pursuit, a rocket is fired in the same club where Thomas encounters Mateen’s character. Something else to take note of is the rocket being fired ends up on the train we saw earlier in the trailer. This could be a hint that some of the action might shift to different locations in a continuous shot or a series of shots.

This tells me that the ability to open doors to a different location over a vast amount of distance will be used in this film like we saw in The Matrix Reloaded.

The action continues until it takes a moment to show Trinity in a pod or being released from one in the real world. From there we see Trinity finally kicking ass. 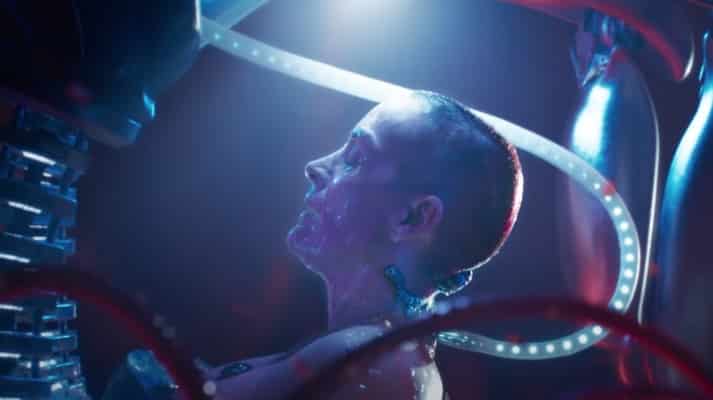 Another scene of Agents in pursuit of Henwick and Mateen leads them to fall out of the building and into something that causes reality to be shattered.

A few cool explosions and a bike chase play out.

Something does pop up that I can’t help but keep coming back to. This portion of the trailer starts to focus on Trinity and what appears to be Thomas now becoming Neo. There’s a shot of Neo stopping bullets with his powers that takes place in the lobby that is similar to the one the icon gun battle in The Matrix. What’s also to note is Trinity’s presence.

If you blink, you’ll miss it, as some type of lit energy blast is between Neo and Trinity. This blast essentially knocks back all the SWAT members that surround our two heroes. I believe this is when we’ll know how Trinity’s importance has grown since the last time we saw her.

Reeves has said in a past interview that The Matrix Resurrections has a “beautiful script that is a love story, it’s inspiring.” That comment is very telling. One of the driving points of the original Matrix trilogy was the love between Neo and Trinity. Their bond helped keep them alive to the end of their journey. It looks as if that bond will be a driving force this time around as well with a bonus. 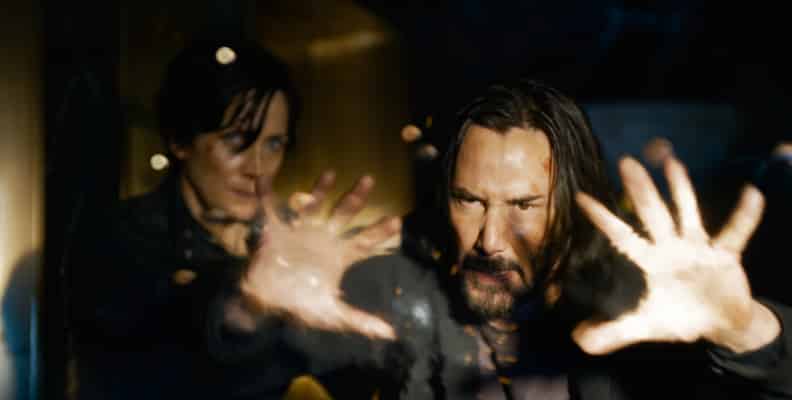 Mateen’s character says earlier in the trailer that “The only thing that matter to you is still here. It’s why I know you’re fighting.” He finishes off this observation by saying, “And why you’ll never give up.” I believe bond will present itself not only as love but also as a share of power.

More and more shots of Neo and Trinity fighting their way out are shown and almost to the point where Neo’s use of his power could be used by Trinity as well. The two even take a “leap of fate” together that could end with both leaving the Matrix of their own free will—also known as “self-substantiation”.

This is something that was touched upon in The Animatrix’s ‘Kid’s Story’ and could be why we don’t see much of the real world in The Matrix Resurrections. This might be the beginning of their journey together again with a life outside of the Matrix.

There are so many ways to dissect this trailer that would pale in comparison to the grand scheme of the movie. I was skeptical of The Matrix Resurrections when production was first announced because the original trilogy was such a cultural impact that it would be near impossible to replicate that. The jury is still out whether this might be the case, but it is welcoming to see this world once again where the box office is dominated by superhero movies. 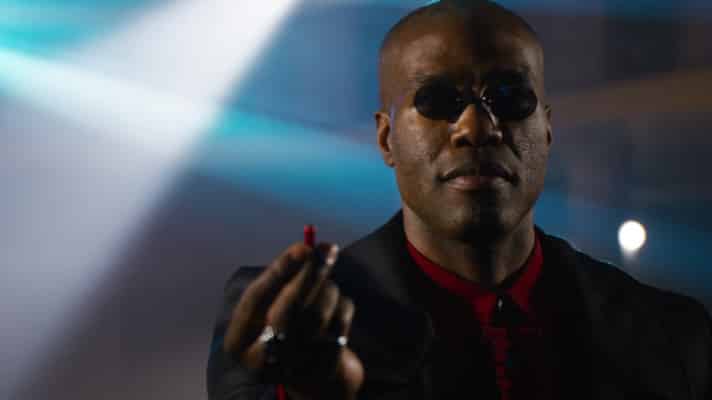 Hopefully, Lana Wachowski and the others involved will have learned from the errors that plagued The Matrix Reloaded and The Matrix Revolutions and give audience members a fitting end to the franchise or a great starting point to bring this world back to life.

Continue Reading
You may also like...
Related Topics:The Matrix, The Matrix Resurrections