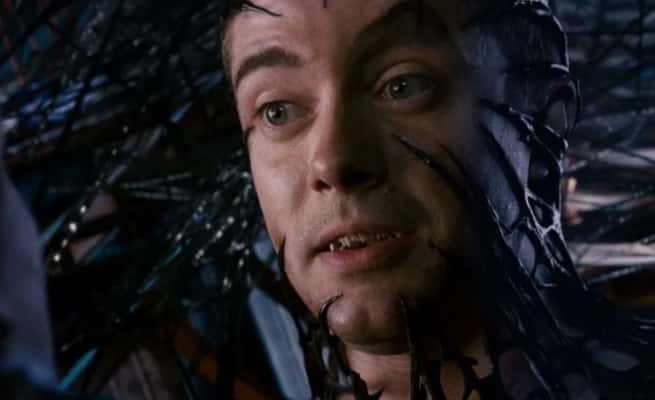 Although Tom Hardy is currently known as the live-action Venom, actor Topher Grace was actually the first to tackle the role in film. He played Venom in Sam Raimi’s Spider-Man 3, and although it wasn’t quite well-received – some have questioned if he could return to Spider-Man: No Way Home by way of the multiverse. Now Topher Grace has jokingly teased his own Venom cameo for Spider-Man: No Way Home, which includes a variety of other “cameos”.

As he stated on Reddit during an AMA, via MovieWeb:

“Please keep it between us but yes, I am in it. The plot starts with Peter Parker (Tom Holland) bummed that everyone knows his identity and then some crazy s–t happens with Dr. Strange and Dr. Octopus (Alfred Molina) comes into his dimension. Then Electro and the Green Goblin hop out of one of those ‘energy circles’ and they’re like ‘It’s spider stompin time’. Then Tom Hardy and I pop out and battle each other and I win (obvi), it’s like not even a fight I just kick his ass immediately. Not to give too much away but there are also some actors from the original 70s Spiderman show, Aquaman and Batman (Affleck, not Keaton) crossover, and thanks to Disney Han Solo’s ghost from Rise of Skywalker, and that Eve robot from Wall-E. Again, please keep between us.”

At this point, Spider-Man: No Way Home has gathered all sorts of expectations from fans. Aside from a wide number of rumors and leaks, it’s been hard to keep track of just how big of a movie this will be. Because the movie will utilize the multiverse as a means to bring back former Spider-Man villains from other continuities, fans have no idea how far the upcoming movie could go. As a result, Topher Grace seems to be making fun of these theories by suggesting Spider-Man: No Way Home will have many other unrealistic cameos involved amidst his (unlikely) return as Venom.

In the meantime, we’ll just have to wait for the highly anticipated release of Spider-Man: No Way Home to know for sure who will be appearing and who won’t.

The highly anticipated MCU film was directed by Jon Watts from a script by Chris McKenna and Erik Sommers.