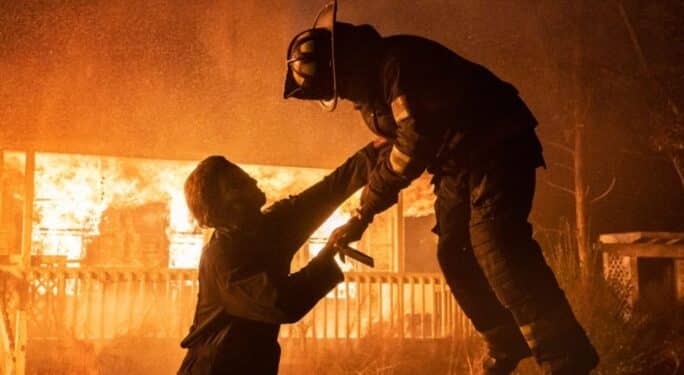 The horror genre has often been controversial for its reliance on bloodshed and violence. The Halloween film franchise is no exception. Now it seems the upcoming sequel Halloween Kills is being targeted for the brutal firefighter massacre featured in the film. Specifically, a petition has been launched in an effort to have the scene from the upcoming film Halloween Kills removed.

As noted in the petition via Change.org:

“I want the scene in the new movie Halloween Kills where they show the Slaughtering of firefighters,” the petition reads. “It is wrong because firefighters have been lured to houses fire and murdered by the person who set the fire. And it’s wrong that Michael killed the firefighters with the gear from the other firefighters he killed. As a soon to be firefighter I find it very offensive and so does my mom and dad who are retired firefighters.”

“So I want that scene taken out of the movie. Michael didn’t have to kill them in a way they saved him so he should have saved the two firefighters in the house and went on his way to kill sister. There is no reason for that horrible disgusting scene. Especially since it has happened in real life. Like I said before firefighters have been lured to house fires and killed by some psycho in real life.”

With the film being a massive entry in the entire slasher subgenre, it isn’t surprising that there’s such a sequence in the film. As such, it seems unlikely that it’ll be removed – and we can probably expect plenty of other scenes like it. In any case, fans have been criticizing the petition – and one fan even launched their own petition to stop the first one. Funnily enough, the second petition is the one with more signatures.

Whether people want to see such violence or not, Halloween Kills will be arriving soon. And with it will be Michael Myers on another bloody rampage. As such, audiences better brace themselves – and get ready for another bloody entry in the long-running Halloween franchise.

Audiences will be able to see Halloween Kills this month on October 15, 2021 when it hits theaters and the Peacock streaming service simultaneously.