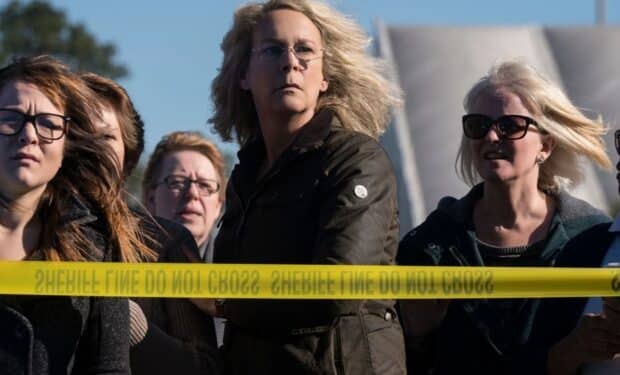 It’s an exciting time for Halloween fans. The next upcoming installment in the franchise, Halloween Kills, is only a few days away. As such, star Jamie Lee Curtis is opening up about Halloween Kills and the message it’s trying to send regarding “mob violence.” To begin, she explained what its predecessor, the 2018 Halloween film, was about. According to her, the previous film had a message regarding “women taking power and speaking truth to power” as well as “voicing their experiences as trauma victims.”

As she fully explained while speaking on Eli Roth’s History of Horror podcast:

“[When] we were launching the 2018 movie, it was right in the center of the MeToo movement,” she said. “And so women taking power and speaking truth to power and voicing their experiences as trauma victims was echoing all over the world when we released that movie — a movie about a woman taking power from her trauma against her oppressor.”

“So I think there was this spectacular confluence of life and evolution of women and Laurie Strode coming to grips with Michael Myers.”

As for the new film, Halloween Kills, she explained how the new message pertains to “mob violence.” As noted by Jamie Lee Curtis in the same interview:

“The second movie is about mob violence,” she said.

“We have just in America watched a mob descend on January 6 with nooses and stun guns and members of Congress in the building,” she continued. “And we all watched it on TV.”

Jamie Lee Curtis related this to the new film, explaining that it tells the story of a “mob descending together,” as they “take matters into their own hands.” As such, it’ll be interesting to see how the new movie turns out with such a strong message behind it.

Audiences will be able to see Halloween Kills this month on October 15, 2021 when it hits theaters and the Peacock streaming service simultaneously.