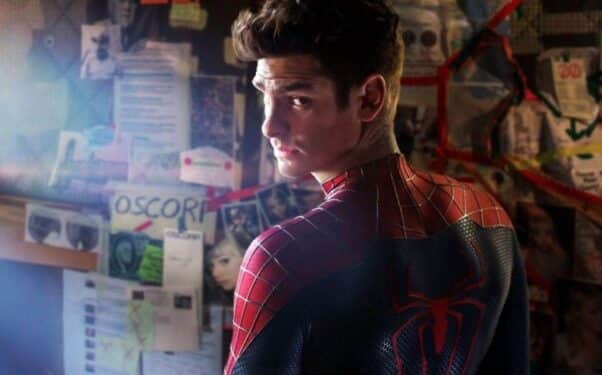 The Spider-Man franchise will soon expand into some very interesting directions with the upcoming MCU film Spider-Man: No Way Home. The movie is going to be combining characters from several different Spider-Man continues, allowing Tom Holland’s Peter Parker to fight against Alfred Molina’s Doc Oct and much more. However, it’s still unconfirmed whether or not we’ll see any other Peter Parker incarnations in the film. More specifically, fans are still trying to figure out if Tobey Maguire and/or Andrew Garfield’s Spider-Man could be making appearances in the film. There have been some leaks and rumors suggesting they will appear, including an image from a Spider-Man: No Way Home tie-in website.

As revealed via Twitter user @SpiderMan3News, a Russian website for Skittles and their tie-in marketing campaign with Spider-Man: No Way Home has a very interesting image. Specifically, it’s an image of Andrew Garfield’s Spider-Man as seen in The Amazing Spider-Man film series. However, it should also be noted that the image is only a modified promotional image taken for The Amazing Spider-Man 2 in 2014.

With this in mind, the image should be taken with a grain of salt. But it still wouldn’t be much of a surprise with the other leaks, rumors, and Spider-Man characters appearing if Andrew Garfield were to as well. Of course, with the information still not having been confirmed, we won’t know until there’s an official statement or release of some kind made. As such, we just might have to wait until the official release of the film in December to know for certain.