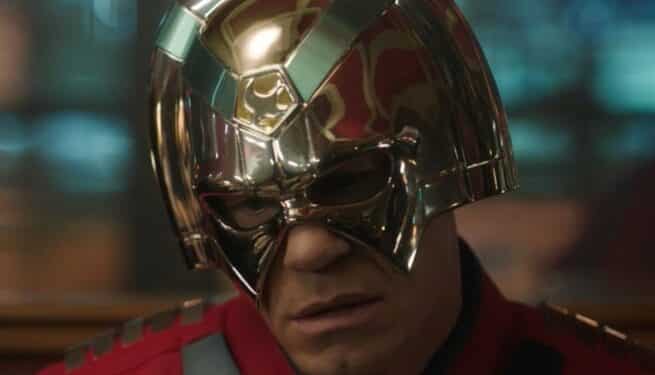 John Cena’s Peacemaker was a definite stand out of James Gunn’s The Suicide Squad, the highly successful soft reboot/quasi-sequel film. So much so that WB asked Gunn to bring us more Peacemaker in his own 8 episode spin off series for HBO Max! Coming in January 2022, Peacemaker will explore a deeper look into the character and what makes him tick. And, at DC Fandome 2021, Gunn and the cast offered up a little insight into the series as well as a brand new trailer for the series!

Peacemaker looks to expand on the character fans love to hate from the film. Cena excels at the character and its good to see that he can explore the nuances of what makes Peacemaker the way he is today. James Gunn is as giddy as a school girl over this project, saying its the best time he’s ever had.

Fans will see the vulnerability of Peacemaker as he tried to redeem himself for all of the bad he has done. We get to find out why he is the way he is, down to his father, played by the great Robert Patrick. Eagley, Peacemaker’s pet eagle, is also in the show! You will get the expected action and over the top violence we got from the film, but also expect a bit of an Office work place family vibe as the team plays just as big of a part as Cena himself.

The eight episode series, all written by Gunn (who also directs the first five episodes), will hit the HBO Max streaming series as 2022 starts and will bring the brash and hyper violent style from the film to a series that goes beyond and explores the depths of an unlikeable character and turn him into something that fans can endeavor themselves to over time.

Are you excited for Peacemaker on HBO Max? Let us know in the comments below!